UNCLE TOM'S CABIN; OR, LIFE AMONG THE LOWLY [VOLUME 1 ONLY] 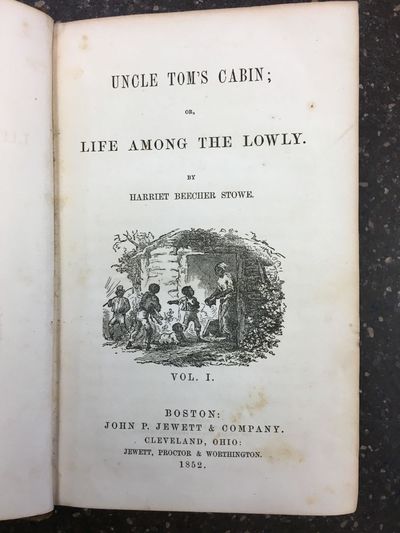 by Stowe, Harriet Beecher
Boston: P. Jewett and Company, 1852. First Edition, First Issue. Hardcover. Octavo, 312 pages, Volume 1 only; G-; Brown cloth boards and spines with gilt lettering and illustration; moderate rubbing and wear to boards, chipping to head and tail of spine; some gatherings partially loose; foxing throughout; contemporary name 'Blanchard' written on ffep, dated 1852.; First printing, with no other printings listed on the copyright or title page. First issue points: "spilt" (rather than "spiled") in Volume I, page 42, line 1; Hobart & Robbins shown on the copyright page.; Shelved in case 2. BAL 19343; Uncle Tom's Cabin; or, Life Among the Lowly, is an anti-slavery novel by American author Harriet Beecher Stowe. Published in 1852, the novel had a profound effect on attitudes toward African Americans and slavery in the U.S. and is said to have "helped lay the groundwork for the Civil War". Uncle Tom's Cabin was the best-selling novel of the 19th century and the second best-selling book of that century, following the Bible. In the first year after it was published, 300,000 copies of the book were sold in the United States and one million copies in Great Britain. [wikipedia]. Shelved Dupont Bookstore. (Inventory #: 9-3-1317308)
$1,120.00 add to cart or Buy Direct from
Second Story Books
Share this item