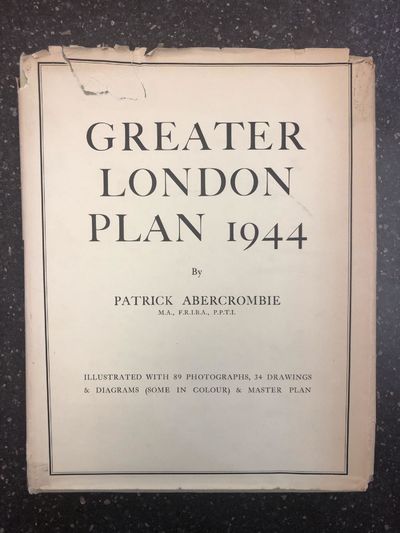 by Abercrombie, Patrick
London: His Majesty's Stationery Office, 1944. First Edition. Hardcover. Quarto 221 pages, VG/G+; spine is beige with black lettering; dust jacket is in a mylar covering, has moderate wear along the top and bottom edges, with chipping at the top and bottom of the spine, has several small closed and open tears, has several pieces of tape on the inside, has rubbing and discoloration throughout; binding has minor wear along the top and bottom edges, has heavy bumping on the fore edge corners, boards have minor warping; pages have minor age toning and warping; profusely illustrated with maps and photographs; contains a two part separate map of the master plan; shelved case 12. After the German aerial invasion of Britain in World War II, so much of London had been destroyed that the British government organized and commissioned a large scale plan to rebuild and restructure the city. This was the largest rebuilding London had experienced since the Great Fire of 1666. Shelved Dupont Bookstore. (Inventory #: 9-421-1317311)
$200.00 add to cart or Buy Direct from
Second Story Books
Share this item

SWAMI PARAMANANDA AND HIS WORK [2 VOLUMES]

La Crescanta, CA : Ananda-Ashrama/Superior press , 1926
(click for more details about SWAMI PARAMANANDA AND HIS WORK [2 VOLUMES])
View all from this seller>