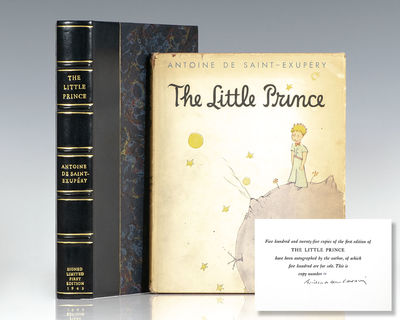 by Saint-Exupery, Antoine De
New York: Reynal and Hitchcock, 1943. Signed limited first edition, one of 525 signed numbered copies, this is number 66. Signed by Antoine De Saint-Exupery. Small quarto, original salmon cloth, illustrated. Fine in a near fine dust jacket. Housed in a custom half morocco clamshell box. A very sharp example. The Little Prince has something of Hans Christian Andersen in it, something of Lewis Carroll, and even, it may perhaps be said, a bit of John Bunyan. Saint-Exupery's lyrical treasure has entered childrens literature, in the manner of quite a few other such hard-to-define works in the preceding centuries" (Pierpont Morgan Library). A year after the books publication in 1943, Saint-Exupery disappeared over the Mediterranean while flying a reconnaissance mission for his French air squadron, making this signed limited very desirable. (Inventory #: 99850)
$20,000.00 add to cart or Buy Direct from
Raptis Rare Books
Share this item