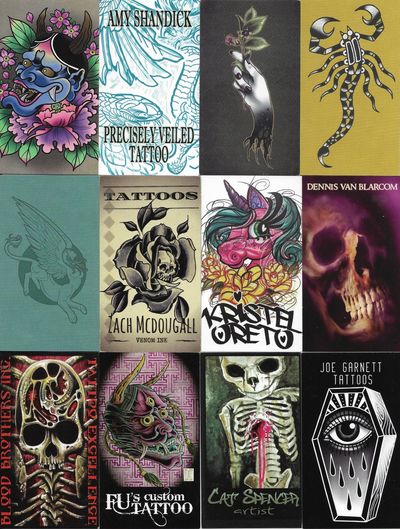 3-ring binders
[Tattoos, Graphic Design] Amazing Collection of Over 1,800 Contemporary Tattoo Artist Business Cards. An impressive collection of 1,856 tattoo business cards from 49 states and the District of Columbia (lacking examples from only South Dakota). The bulk of the cards are from California, Florida, Georgia, Massachusetts, Minnesota, New Hampshire, New Jersey, New York, North Carolina, Pennsylvania, Tennessee, Virginia, and Washington; while a few states have only a couple cards, including Alaska, Idaho, Mississippi, DC, and Wyoming. The cards were originally arranged by state, with no further organization (they are not sorted by city or alphabetically). Following the states, there are sections for oversized U.S. cards (41), nomads (traveling artists) (4), unknown locations (9), and foreign artists (148). We have added simple tabbed dividers to aid in finding the sections. The cards are housed in three black 3-ring binders. Most of the cards are fine, with a handful of holograph corrections; the binders are fine. While a few older cards are mixed in, the collection primarily represents contemporary studios – late-1990s to current. The collection presents an amazing array of art including photos of actual tattoos, as well as drawings, paintings, digital, and graffiti art, as well as many imaginative and well-executed logos. While some of the cards use stock images—to my mind, not a great selling point for the artists' skills—many of the cards employ a level of graphic design that surpasses even the cards used by graphic designers themselves. As a teaching aid, this collection has many fine examples of what to do—and not do—on a business card. As a collectible, this set offers a glimpse into the trends and evolution of tattoo design, as well as a look at the traditional and contemporary arts that have intermingled in the tattoo world. Most of the cards are the standard 3 1/2 by 2-inch format, though some are square, oversized, or die cut, like the striking black and silver anatomical heart of Joslin Gay of Heart Shaped Affair. There are 3D cards, like Image Art Tattoo Works in Tennessee and Spaulding & Rogers Tattooing Equipment; plastic cards, like the vintage cards from Don's Tattoo Studio in San Antonio, Texas, and a gold on clear card from Empire Tattoo in Boston; a recycled card stamped on the back of a Dr. Pepper case; and even a wooden card from Lilith Tattoo in Seattle. There are no duplicates, but some cards from a single studio may be very similar. For example, a set of nine cards from Jack Brown's Tattoo Revival from Fredericksburg, Virginia, that mimic tarot cards; five cards from Unicorn Ink in Providence, Rhode Island, that resemble RPG cards with illustrations of each of the studio's artists; and a set of ten cards from Rose Tattoo Parlour in NYC, which feature a simple black rose and name of each resident artist. The international section includes artists from Canada, Spain, Argentina, Netherlands, Japan, Brazil, Britain, Taiwan, France, Russia, and several other countries. (Inventory #: 2969)
$2000.00 add to cart Available from Bay Leaf Books
Share this item