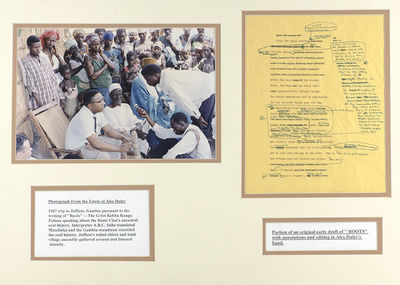 signed first edition
by Haley, Alex
Rare original typescript manuscript leaf from an early draft of Alex Haley's Roots, "the most highly acclaimed book of our time" (Washington Post). Double matted with a large full-color photograph from Haley's estate taken in the tiny village of Juffure in northern Gambia where Haley first met his African relatives of the Kinte clan in 1967 including the griot whose stories were one of the inspirations for the Roots. The photograph shows The GriotKebba Banga Fofana speaking about the Kinte clan's ancestral oral history. The manuscript reads in part, "Within the next ten minutes there, the news had every adult congratulating "Chicken George" for hacing maneuvered such an opportunity for his talented twelve year old Tom." Haley has made numerous corrections to this portion of the text and added several paragraphs in his hand. In near fine condition. Published in October 1976 amid significant advance expectations, Roots was immediately successful, garnering a slew of positive reviews and debuting at #5 of The New York Times Best Seller list. By mid-November, it had risen to the #1 spot on the list. The television adaptation of the book aired in January 1977 and within seven months of its release, Roots had sold over 1.5 million copies. In total, Roots spent 22 weeks at the #1 spot on The Times' list, including each of the first 18 weeks of 1977. Ultimately, it was on the list for a total 46 weeks. Together, the success of the novel and its 1977 television adaptation, sparked an explosion of interest in the fields of genealogy and researching family histories. Haley earned a Pulitzer Prize special award in 1977 for Roots. The television miniseries garnered many awards, including nine Emmys and a Peabody. It was remade again in 2016 starring Malachi Kirby, Forest Whitaker, Anna Paquin, Laurence Fishburne and Jonathan Rhys Meyers. (Inventory #: 96510)
$2,800.00 add to cart or Buy Direct from
Raptis Rare Books
Share this item