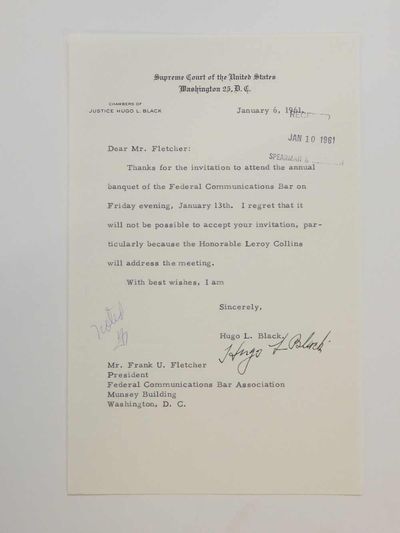 by BLACK, Hugo L. (1886-1971)
Washington, 1961. unbound. very good. Excellent content T.L.S. 8vo. 1 page, Supreme Court of the United States, Washington, January 6th 1961, To Frank Fletcher, declining an invitation to attend the Federal Communications Bar annual banquet, in part: "...I regret that it will not be possible to accept your invitation, particularly because the Honorable Leroy Collins will address the meeting..." *Leroy W. Collins had served as the 33rd Governor of Florida from January 4th 1955 to January 3rd 1961, leaving that office only 3 days before this letter was written. His popularity as a Southern Governor was so high that in 1960 he was selected as Chairman of the Democratic National Convention, being acceptable to the Southern Constituency of the party as well as to Northern liberals, because of his great support of civil rights. In 1954, soon after the unanimous decision by the United States Supreme Court regarding Brown v. Board of Education (supported by Justice Black), Collins initially condemned the Court's decision as impending States Rights but quickly supported the initiative so as to prevent the State of Florida from passing an "Interposition Resolution". In the aftermath, Justice Black made statements questioning Collins' dedication to civil rights issues and Collins in turn chose to remind the public of Justice Black's former membership in the Ku Klux Klan. Needless to say both men despised each other and continued their feud for the rest of their lives. An important letter concerning two powerful southern politicians whose careers spanned the chapters of Jim Crow and the earliest days of the civil rights movement. Fine condition. United States Senator who later served as an Associate Justice of the Supreme Court (1937-1971). (Inventory #: 290547)
$300.00 add to cart or Buy Direct from
Argosy Book Store
Share this item