Under the North Pole; The Wilkins-Ellsworth Submarine Expedition 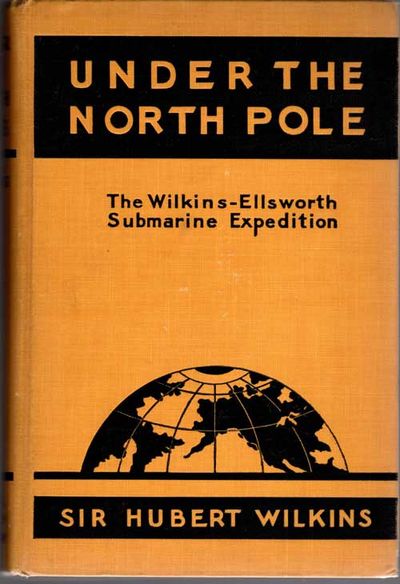 by Wilkins, Sir George Hubert
New York: Brewer, Warren & Putnam, 1931. First Edition. Very Good. [8.75x6in]; xiv, 347 pp. frontispiece of Wilkins, 37 images and illustrations; Yellow cloth on covers with black ink lettering on front and spine, illustration of northern hemisphere on front, top edge black ink and top and bottom edges trimmed; map of planned route to the North Pole above and below the ice on front and back end papers; minor shelf wear with corners bumped, spine slightly darken, bookplate of prior owner on half title. Sir Herbert Wilkins (1888-1958) was one of the last great heroes of the Heroic Age of Polar Exploration. This book is unusual in that it was written before the expedition to use a modified World War I diesel and battery powered submarine under the ice covered North Sea from the Barents Sea to the Bearing Sea. The plan was dependent on the ability to drill through the ice for ventilation of the diesel engines when charging the batteries. The expedition only made it under the ice for a few miles north of Spitsbergen Is. when the crew mutinied and mysterious equipment failure force them to turn back.Wilkins was a little ahead of his time and his plan was not completed until 1957 with the nuclear powered Nautilus. (Inventory #: 11696)
$207.00 add to cart Available from
David Spilman Fine Books
Share this item