The Worst Journey in the World; With maps and illustrations by the late Doctor Edward A. Wilson and the Author [Includes a 1948 postscript that reexamined the Polar party's fate after 35 years] 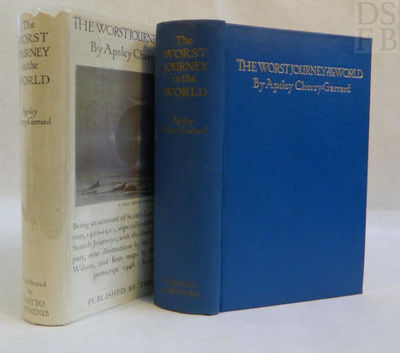 by Cherry-Garrard, Apsley
London: Author, Chatto and Windus, 1951. First Edition. Near Fine/Very Good. Library Edition with corrections and postscript [1948] in one volume [9x6.25in]; lxiv, 612 pp., frontispiece color illustration of Halo around the Moon, 8 illustrations by Edward Wilson and 4 maps (3 folding); Blue cloth covers with gilt lettering on cover and spine with fore and bottom edges untrimmed; Cream dust jacket with black lettering and color illustration of Antarctic landscape with halo moon; Minor shelf wear to bottom covers, chips to dust jacket on edges without loss of text, closed tears with one old tape repair, and slight darken of spine with minor soiling, some leaves unopened. [Rosove 71.I1b, Spence 286, Conrad p. 173]. Apsley Cherry-Garrard (1886-1959) was a last minute Antarctic explorer. He was added to the Robert Falcon Scott Terra Nova Expedition (1910-1913) as an assistant zoologist after a large donation to the expedition. Cherry-Garrard proved to be a worthy and was able to hold his own with the other more experienced Antarctic explorers. Edward Wilson chose Bowers and Cherry-Garrard as his companions for a Winter Journey in 1911 to the rookery of the Emperor Penguin at Cape Crozier; a journey which is still without parallel in polar exploration. On their return five weeks later, Scott described their journey as 'the hardest that has ever been made' -- a phrase which later suggested to Cherry-Garrard the title of his narrative. This is an account of Scott's Last Antarctic Expedition, 1910-1913, especially of the Winter, Polar, and Search journeys. Cherry-Garrard had access to the diaries of those who took part as well as his own. He was also part of the party that found Scott, Wilson and Bowers bodies in 1913 when they failed to reach the One Ton supply depot after returning from achieving the South Pole a month after Amundsen. The book was first published in two volumes in 1922 and has not been out of print since then. In all of the editions, the book is widely regarded as the most readable of all the Antarctic literature. George Bernard Shaw wrote, "It was perhaps the only real stroke of luck in Scott's ill fated [Terra Nova] expedition that Cherry-Garrard, the one survivor of the Cape Crozier winter journey, happened to be able to describe it so effectively that the reader forgets how comfortable he is in his arm-chair, and remembers the tale with a shiver as if he had been through it himself."From Rosove, "Cherry-Garrard's book has often been referred to as the finest polar book ever written. Scott's diary left many facets of the expedition and the experiences of its men untold: it was Cherry-Garrard who pulled the entire story of the main party together. He was uniquely suited to do so. He was a member of the main party for the expedition's entire duration, had access to unpublished sources, and was the only member of the Winter Journey to survive the expedition. Most of all, he had the sensibilities and extraordinary literary genius necessary to cope with the complex and tragic subject of the Polar Journey ... The book Cherry-Garrard left behind is a monument immortalizing the expedition in the annals of Antarctic exploration and geographic exploration in general (Inventory #: 13027)
$403.00 add to cart Available from
David Spilman Fine Books
Share this item