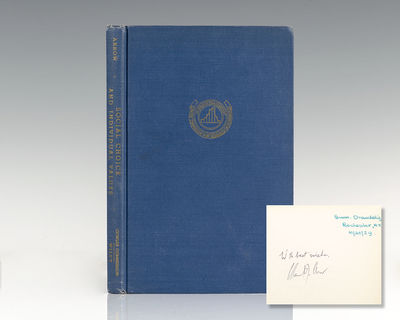 by Arrow, Kenneth J
New York: John Wiley & Sons, 1951. First edition of the Nobel Prize-winning economist's groundbreaking work. Octavo, original blue cloth with titles and frontispiece in gilt. Signed by the author on the front free endpaper, "with best wishes Kenneth J. Arrow." From the library of Emmanuel Drandakis with his name to the front free endpaper, "Emm. Drandakis Rochester, N.Y. 10/20/59." Drandakis was a well-known economist, who specialized in general equilibrium theory and served the University of Athens Department of Economics from 1972 to 2000 and one of the first people from the University of Rochester Economics department to be awarded a Ph.D. In near fine condition with some marginala by Drandakis. The Nobel Prize-winning economist's first book was his doctoral dissertation at Columbia. "Arrows impossibility theorem appeared to have such startling consequences for both political philosophy and welfare economics that literally hundreds of papers have been written to refute it. But Arrows theorem has withstood all technical criticisms and has never been decisively challenged on its own grounds" (Great Economists Since Keynes, 6). Named by The Times Literary Supplement as one of the 100 most influential books since World War II. (Inventory #: 45982)
$3,000.00 add to cart or Buy Direct from
Raptis Rare Books
Share this item