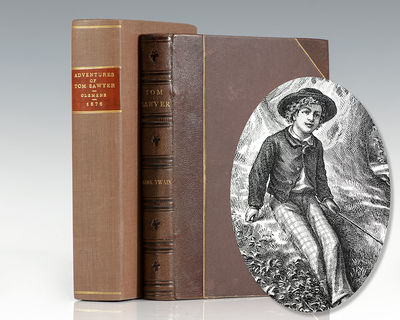 by Twain, Mark [Samuel L. Clemens]
Hartford: American Publishing Company, 1876. Rare publisher's gilt half morocco binding of one of the great masterpieces of American literature. Octavo, original publisher's morocco, wood-engraved frontispiece and numerous illustrations in text by True Williams and others, 4-page publisher's advertisements at end, versos of half-title and preface blank, gilt topstain. In near fine condition. Housed in a custom cloth slipcase. BAL 3369. Johnson, 27-30. MacDonnell, 39-40. MacBride, 40. Housed in a custom clamshell box. An exceptional example. Popular and controversial at the time of publication in 1876, Mark Twain's masterpiece The Adventures of Tom Sawyer has been adapted into dozens of film, television and theatrical productions. The quintessential tale of American boyhood established one of the most memorable characters in American literature who appeared in three later sequels including Twain's other most notable work, The Adventures of Huckleberry Finn. "The first novel Mark Twain wrote without a co-author, Tom Sawyer is also his most clearly autobiographical novel enlivened by extraordinary and melodramatic events, it is otherwise a realistic depiction of the experiences, people and places that Mark Twain knew as a child" (Rasmussen, 459). (Inventory #: 98540)
$14,000.00 add to cart or Buy Direct from
Raptis Rare Books
Share this item