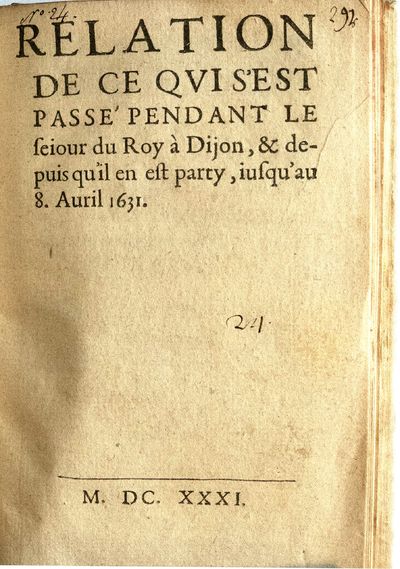 Authorship is attributed to Richelieu, Armand Jean du Plessis, duc de, 1585-1642 by Lindsay et Neu 5953.Authorhip is also attributed to Michel de Marillac. (In Paris, 1563- in Château de Châteaundun, 1632). Marillac was a French Jurist and counselor at the court of Louis XIII. A member of the inner circle of Marie de'Medici, he was arrested 1631, and died in prison).
Gaston was part of several unsuccessful conspiracies and revolts during the reign of his brother,King Louis XIII (ruled 1610–43). Gaston first came into conflict with royal authority in 1626. Herein 1631, when Marie de Médicis was exiled from Paris by Louis in February 1631 for demandingRichelieu's dismissal, Gaston declared his support for the Queen Mother and began raising troops;but he fled to the duchy of Lorraine in April. In January 1632. (Inventory #: 983785)
$500.00 add to cart Available from Golden Legend
Share this item
Golden Legend, Inc.
Offered by