ARTICLES OF ASSOCIATION AND RULES OF THE PHILADELPHIA CHAMBER OF COMMERCE 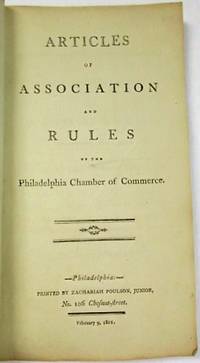 by Philadelphia Chamber of Commerce
Philadelphia: Printed by Zachariah Poulson, Junior, 1801. 8, [18 blanks] pp. Stitched into contemporary marbled wrappers. Fine. [offered with] Manuscript document headed "Chamber of Commerce 2nd March 1801." Folio leaf folded to [1], [3 blanks] pp, addressed on last page, "For Mr. T. W. Francis". The manuscript prints Resolutions to be considered for revision of certain Rules at the next meeting. The Rules, set forth in XVI numbered paragraphs, were adopted at a meeting on January 5, 1801. AAS's copy has our imprint; other copies list only the year, not the month or day. The Chamber's web site states, "Since 1801, the Chamber has brought area businesses and civic leaders together to promote growth and create opportunity in our region." This mission comports with that printed in its Articles of Association: "For the purpose of aiding the Trade of the City of Philadelphia, by carrying into effect such Rules and Regulations as may, from time to time, be established with respect to our Commerce, and the adjustment of Mercantile differences between each other." Thomas Whilling Francis [1767-1815], born in Philadelphia, graduated from the University of Pennsylvania in 1784. He then entered the family mercantile firm of Willing and Francis. In 1786 he became a private in the Fourth Company, Second Philadelphia Battalion, of the City Cavalry, and years later was promoted to Captain. An original member of the Chamber of Commerce, he served on its Committee for the first month of its existence, and in 1815 was its vice-president. He was also a director of various Philadelphia mercantile, educational, governmental and benevolent establishments. ["The Second Troop Philadelphia City Cavalry," THE PENNSYLVANIA MAGAZINE OF HISTORY AND BIOGRAPHY, VOLUME 49, 1925, pp.83-85.] AI 1148 [1- PHi] and Sabin 61974 [neither noting the month in the imprint]. Not in Rink or Eberstadt. OCLC 191262677 [1- AAS] as of April 2019. (Inventory #: 35810)
$750.00 add to cart or Buy Direct from
David M. Lesser, Fine Antiquarian
Share this item
David M. Lesser, Fine Antiquarian Books LLC
Offered by