Experiments to Determine the Density of the Earth 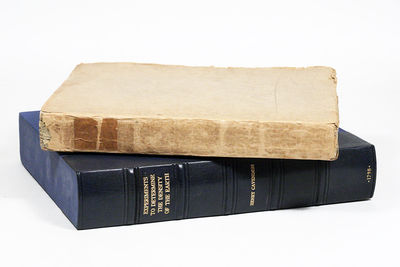 by CAVENDISH, HENRY
London: Peter Elmsly, 1798. First edition. original wrappers. Very Good. THE CAVENDISH EXPERIMENT: FIRST EDITION IN EXTREMELY SCARCE ORIGINAL WRAPPERS OF THE REPORT OF CAVENDISH'S EXPERIMENT TO DETERMINE THE DENSITY OF THE EARTH AND NEWTON'S GRAVITATIONAL CONSTANT "G", ONE OF THE MOST FUNDAMENTAL UNIVERSAL CONSTANTS. In 1798, Cavendish, by means of a torsion balance, was able to measure the force of gravitational attraction between pairs of lead spheres, thus allowing for the calculation of the gravitational constant, G, in Newton's revolutionary law of universal gravitation. With this value, the density of the Earth, and therefore the Earth's mass, could readily be derived.

The experiment was beautiful in its simplicity. "The apparatus consisted of two lead balls on either end of a suspended beam; these moveable balls were attracted by a pair of stationary lead balls. Cavendish calculated the force of attraction between the balls from the observed period of oscillation of the balance and deduced the density of the Earth from the force. Cavendish was the first to observe gravitational motions induced by comparatively minute portions of ordinary matter. The attractions that he measured were unprecedentedly small, being only 1/500,000,000 times as great as the weight of the bodies" (Dictionary of Scientific Biography).

"The Cavendish experiment was significant not only for measuring Earth's density (and thus its mass) but also for proving that Newton's law of gravitation worked on scales much smaller than those of the solar system. Since the late 19th century, refinements of the Cavendish experiment have been used for determining G" (Britannica).

The gravitational constant - one of the very few fundamental constants of nature - is at the core of our most essential models of the universe, from Newton's law of gravitation to Einstein general theory of relativity.

Note: With small stamp on inside front wrapper and verso of general title of "Zentralbibliothek der Hohen Schule", indicating that this was one of the millions of books confiscated by the Nazi's during the war for an intended academic library. It is most likely this book fell into the hands of Soviet or American forces at the war's end. In light of this history - and through a generous gesture by the consignor - 100% of the proceeds of the sale of this item will be donated to the Yad Vashem World Holocaust Remembrance Center, for the support of its archival work. (Inventory #: 2254)
$4,600.00 add to cart or Buy Direct from
Manhattan Rare Book Company
Share this item