Paul Revere’s Iconic Boston Massacre Print “The Bloody Massacre perpetrated in King-Street Boston on March 5th 1770 by a party of the 29th Reg.” 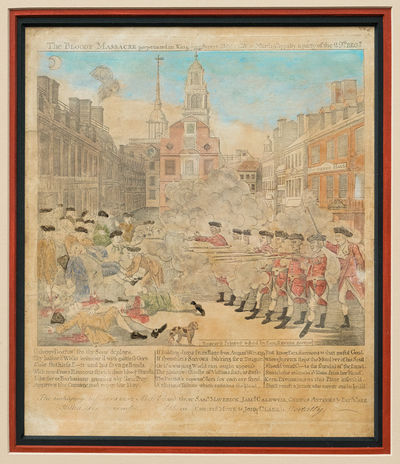 While faithless P—n and his savage Bands,

Approve the Carnage, and enjoy the Day.


If scalding drops from Rage from Anguish Wrung

If speechless Sorrows lab'ring for a Tongue,

Or if a weeping World can ought appease

The plaintive Ghosts of Victims such as these;

The Patriot's copious Tears for each are shed,

A glorious Tribute which embalms the Dead.


But know, FATE summons to that awful Goal,

Where JUSTICE strips the Murd'rer of his Soul:

Should venal C—ts the scandal of the Land,

Snatch the relentless Villain from her Hand,

Keen Execrations on this Plate inscrib'd,

Shall reach a JUDGE who never can be brib'd.

By the spring of 1770, New England's metropolis had been smoldering with discontent. In 1765, Parliament had imposed the Stamp Act. Though repealed, it was soon replaced by Townshend's "Intolerable Acts," including new taxes. Then, the Crown's commissioners of customs, fearing (with good reason) for their safety, had requested military support. In 1768, several infantry regiments, accompanied by a small artillery train, were tasked with keeping order in the city. Nearly 2,000 soldiers lived amongst Boston's population of just 15,000. The quartering of the troops in private homes was seen as an additional affront to America's already injured liberty. British soldiers soon became a despised caste.

The details of the Boston Massacre are murky. Contemporary witnesses, chroniclers and the soldiers and subjects at the heart of the matter told very different stories. In any case, on March 2, 1770, a scuffle broke out between workers at a rope walk and a number of soldiers who supplemented their wages with occasional work. The incident was repeated the following day. On the night of the 5th, the riot known as the Boston Massacre began when a group of apprentices, teenagers for the most part, heckled and harassed a lone sentry at the customs house. As the crowd continued to gather, a small relief arrived at the scene, determined to extricate the soldier. Epithets, and snowballs and ice were hurled. A thrown club struck a soldier; when he rose to his feet, he fired his musket. Enraged, the crowd advanced en masse. They were met by a volley of bullets. Three men were killed outright, two more died of their wounds, and several more were severely injured.

Boston was horrified as Church bells rang throughout the city, and sermons and speeches and town meetings railed against the British atrocity. On March 26, an advertisement in the Boston Evening Post
announced that "A Print, containing a Representation of the late horrid Massacre in King-Street," was available for purchase. Edes & Gill, which printed the engraving for Revere, shows a charge on their ledger for 200 copies on March 28.)

The scene was actually drawn and engraved by Henry Pelham, but Revere somehow acquired a copy. Revere, primarily a silversmith, also had a reputation as an engraver. He advertised and rushed out his version, trumping Pelham by a crucial week, ensuring that Revere's production would dominate the market.

The Boston Massacre print is a propaganda masterpiece. Rather than picturing true riotous confusion on all sides, it depicts murderous and calculating Redcoats firing a uniform volley into a crowd of unarmed
civilians who are already tending to their fallen peers. The British officer has his sword raised, apparently ordering his men to open fire. A rifle barrel, presumably from a hidden British soldier, can be seen firing from the window of the "Butcher Shop" above the Customs House, drawing a potent connection between the butchery of the day and the hated customs officers who were being protected by the British garrison. In spite of the presence of a crescent moon above, the event appears as if in daylight rather than accurately after dark. There is no evidence of the snowballs or hurled ice or other provocations of the patriots. In addition to the evocative caption-title, Revere affixed a lurid poem beneath the image accompanied by an inaccurate list of casualties (two men listed as "mortally" injured would eventually recover). The combined effect on the colonial audience was immediate and dramatic: Boston's population was outraged, and anti-British sentiment surged throughout the colonies as news spread.

Among those killed were Crispus Attucks (1723-1770), who was variously described as African American, mulatto, and Native American, perhaps a Nantucket. He was born into slavery in Framingham, Massachusetts, and ran away in 1750 to become a sailor and dock worker. Samuel Gray was a rope maker and notorious street brawler. Samuel Maverick (1752/53-1770) was a seventeen-year-old apprentice to Isaac Greenwood, who was a carpenter in Boston. Maverick lived with Greenwood's family and responded to the street bells that night, thinking there was a fire. Shot in the stomach, he died the next morning. James Caldwell (1752/53-1770) was also seventeen and was a sailor on the brig Hawk, under the command of Capt. Thomas Morton. Between 1768 and 1770, it traveled between the West Indies and Boston. Patrick Carr (1739/40-1770) was born in Ireland and became a leather-worker in Boston. Shot in the abdomen, Carr died nine days later. He insisted that the soldiers fired in self-defense, and he bore no malice toward them. The two persons listed as mortally wounded—Christopher Monk (1752/53-1780) and John Clark (b. 1752)—did not die immediately from their wounds. Only seventeen years old when shot, Monk died ten years later, likely from complications of the wound to his groin and resulting disability. Clark, another seventeen-year-old, was a twin from Medford and was an apprentice to Capt. Samuel Howard in Boston. Wounded in the groin and expected to die, Clark recovered.

Tempers had cooled somewhat by the time the British soldiers and their commanding officer, Capt. Thomas Preston, were tried seven months after the fact. Determined to be fair, radical patriots John Adams, Robert Auchmuty, and Josiah Quincy, Jr. represented the accused, all but two of whom were acquitted. The acquittal saved the soldiers but did not protect the authority that they represented. The Boston Massacre became a rallying cry for the Sons of Liberty and other opponents of the Crown. Every anniversary became an occasion for remembrance and agitation. Revere's image popularized the event, shaping anti-British public opinion throughout the American colonies and hastening the split that followed.

Though it seemed like Revere's prints were everywhere at the time, today, they are scarce and fine copies seldom come on the market. The scarcity, when coupled with the print's status as an icon of the Revolution, ensures continued interest: "It is a corner-stone of any American collection." (Brigham, p. 52).

A first state of the engraving shows the clock on the church steeple reading 8 o'clock; only two first impression copies are known. The event actually occurred around 10 pm, and all of the other known copies, including this one, shows the clock at 10:20.

Henry Pelham, also of Boston, actually first drew the scene made famous by Revere. Pelham's version features a death's head and a motif featuring cloud bank and lighting breaking apart two crossed swords in the bottom margin, and is titled The Fruits of Arbitrary Power. Revere was able to rush his version into print a week before Pelham. Another engraver, Newburyport's Jonathan Mulliken, also produced a graphic depiction of the infamous event, also in 1770, taken from Revere's print.

Paul Revere (1735 - 1818) was an American silversmith, engraver, and Boston patriot most famous for alerting the Massachusetts militia to the approach of British forces before the battles of Lexington and Concord. Born in Boston's North End, Revere was prosperous and prominent, and took considerable risk when organizing the colonial resistance and intelligence networks. His almost entirely fictitious depiction of the Boston Massacre helped galvanize colonial resistance to British rule. He was a leader of the Boston Tea Party and served on the Boston Committee of Public Safety. He later served as a Massachusetts militia officer. Following the war, Revere returned to his silversmith trade and used the profits from his expanding business to finance his work in iron casting, bronze bell and cannon casting, and the forging of copper bolts and spikes. He became the first American to roll copper into sheets for use as sheathing on naval vessels. (Inventory #: 25697)
$345,000.00 add to cart Available from Seth Kaller
Share this item