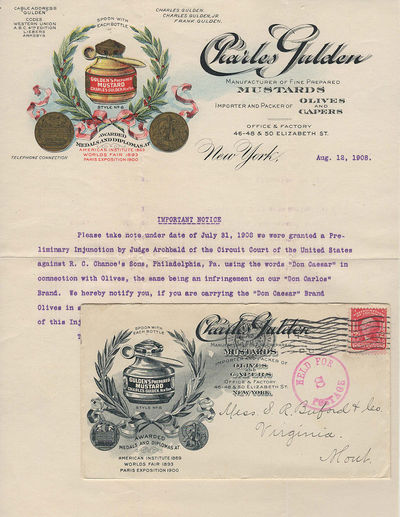 This colorful letter from Gulden's Mustard contains a mimeographed notice (signed in print by Charles Gulden) informing stores the company has obtained a temporary injunction against a rival firm to prevent the sale of Chance & Son's "Don Caesar" olives, whose name and packaging was quite similar to Gulden's "Don Carlos" brand. The multi-color letterhead features a jar of Gulden's Mustard with its famous marketing spoon and two gold medals that had been awarded to the company.

The illustrated advertising envelope features the same illustration in black and white. It is franked with a 2-cent red Washington stamp (Scott #309), tied with a New York machine postmark. Apparently, the cover was first mailed without a stamp as it was applied over an earlier postmark, and an additional circular red handstamp reads, "Held for Postage S." All in nice shape.

Guilden's, known for its spicy brown mustard, is the oldest continuously operating and third-largest mustard brand in the United States. The company was founded in 1869 by Charles Gulden, and its popularity soared after he began attaching a small metal spoon to each jar. The mustard won gold medals at the Chicago and Paris world's fairs. Today, Gulden's is part of the international ConAgra Foods conglomerate and is made in Milton, Pennsylvania. The Third Circuit Court of Appeals ruled in Gulden's favor in August of 1910.

A colorful record of an established food company's effort to protect its product line from infringement by competitors. (Inventory #: 009309)
$150.00 add to cart or Buy Direct from
Read'Em Again Books and Paper
Share this item

Sales tax of 6% required for books shipped to addresses in Virginia. Additional fees may be required for exceptionally heavy or oversize items.Returns accepted for any reason for full refund (less shipping) if I receive the return within 14 days of shipment and items are received in the same condition as sent.
More from this seller

by Kept by Samuel Rex