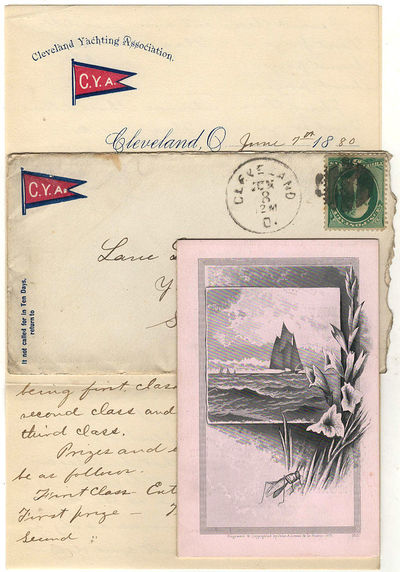 by C. B. Krause
Cleveland, Ohio: Cleveland Yachting Association, 1880. Envelope or Cover. Very good. The bi-fold, cardstock invitation is addressed to L. Lockwood Esquire of Sandusky. It includes a chart of the regatta course as well as the regatta rules and list of prizes. Also included are the cover letter and envelope used to forward it; both are branded wtith the club's CYA pennant. The invitation measures 5.75" x 4.5" unfolded. The letter and invitation report that the regatta was to be held on July 5th, 1880 and that all entries would be assigned to one of three classes: First (over 35', entrance fee $10, first prize $75), Second (22' to 35', entrance fee $5, first prize $60), Third (under 22', entrance fee $3, first prize $40). They also provide additional information about the course, the committee, and a special prize. The envelope is franked with a three-cent green Washington stamp (Scott #183). Everything is in nice shape. The CYA, founded in 1878, was organized by George W. Gardner, the mayor of Cleveland who as also a pioneer in yacht racing. Its first regatta was held in 1879; this invitation is for the second. For more information see the Encyclopedia of Cleveland History on- line at Case Western University and Brown's The History of American Yachts and Yachtsmen. (Inventory #: 009374)
$50.00 add to cart or Buy Direct from
Read'Em Again Books and Paper
Share this item