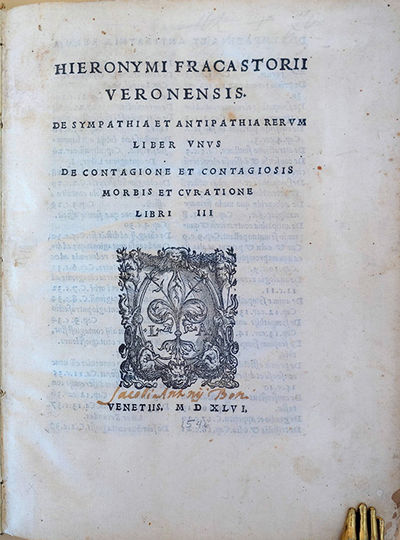 by Fracastoro, Girolamo
Venice: Heirs of L. Giunta, 1546. Fracastoro, Girolamo (1478-1553). De sympathia et antipathia rerum liber unus. De contagione et contagiosis morbis et curatione libri III. 4to. [4], 76, [4]ff. Venice: Heirs of Lucantonio Giunta (colophon), 1546. 210 x 155 mm. Vellum ca. 1546, rebacked, endpapers renewed; preserved in a cloth slipcase. Scattered staining and browning, but very good. First Edition of Fracastoro's most important scientific work, forming "the foundation of all modern views on the nature of infectious diseases" (Heirs of Hippocrates 101). Fracastoro hypothesized that contagious diseases were caused by minute particles (seminaria), spontaneously generated from certain types of putrefaction and possessing the faculties of propagation and movement. He illustrated the three means by which contagion can be spread: by simple contact, as in scabies and leprosy; by fomites or inanimate carriers, such as clothing or sheets; and at a distance without direct contact, as in plague, smallpox and like diseases, whose transmission he attributed to the action of the air, denying the widespread belief in the influence of occult powers. He provided accounts of many contagious diseases (including the first authentic description of typhus), affirmed the contagiousness of tuberculosis, and commented on the spread and control of epidemics. He was also perhaps the first to enunciate the modern doctrine of the specific characters and infectious nature of fevers. Although published over three hundred years before the modern germ theory of disease, Fracastoro's theory of contagion was a fruitful ancestor of this theory, yielding hypotheses on causes and ways of infections that were verified in succeeding centuries. Adams F-821. Garrison-Morton.com 2528. Norman 827. (Inventory #: 45020)
$3850.00 add to cart or Buy Direct from
Jeremy Norman & Co.
Share this item
Jeremy Norman & Co., Inc.
Offered by