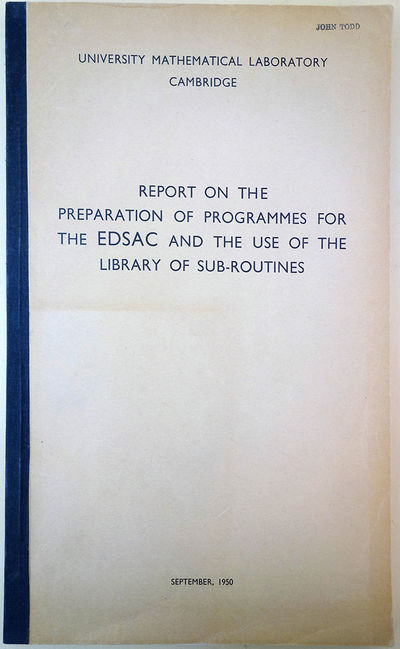 by Wilkes, Maurice V.
Cambridge: University Mathematical Laboratory, 1950. Wilkes, Maurice (1913-2010) et al. Report on the preparation of programmes for the EDSAC and the use of the library of subroutines. Dittoed document in two colors. [3], 40 [2], 26, 39, xi ff. 323 x 201 mm. N.p., September 1950. Original tan printed wrappers, cloth spine. Fine. Stamp of John Todd (1911-2007) on the front wrapper. First Edition, One of No More Than 100 Copies Issued. The first report on how to program an operational stored-program computer-Cambridge University's EDSAC, the world's second stored-program computer and the first to be truly usable for large-scale operations. The machine was constructed at the University's Mathematical Laboratory (now the Computer Laboratory) by Maurice Wilkes, who was inspired by John von Neumann's account of the EDVAC; it ran its first program on 6 May 1949. The Report on the Preparation of Programmes for the EDSAC was prepared by Wilkes and a fifteen-man team of researchers at the Mathematical Laboratory, and distributed to no more than one hundred people-"everyone we thought would be interested, both in the United Kingdom and abroad" (Wilkes, Memoirs of a Computer Pioneer, p. 149). The material in this dittoed report was published with very few changes in Wilkes, Wheeler, and Gill's Preparation of Programs for an Electronic Digital Computer (1951). This copy bears the ownership stamp of mathematician John Todd, professor of mathematics at Caltech and pioneer of numerical analysis and high-speed computer programming. Origins of Cyberspace 1027. (Inventory #: 44861)
$15000.00 add to cart or Buy Direct from
Jeremy Norman & Co.
Share this item
Jeremy Norman & Co., Inc.
Offered by