Process and Reality: An Essay in Cosmology. 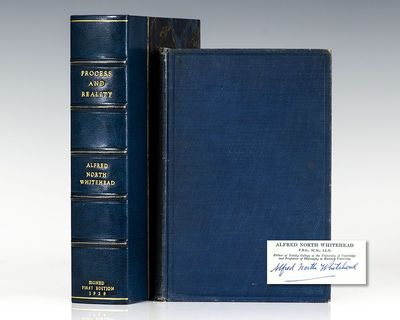 by Whitehead, Alfred North
New York: Macmillan & Company, 1929. First edition of Alfred North Whitehead's magnum opus. Octavo, original blue cloth. Signed by Alfred North Whitehead on the title page. From the Library of Henry David Aiken, with his signature dated 1943 on the front free endpaper. Aiken was a student of Ralph Barton Perry's at Harvard when Whitehead also was a professor there from 1924 through 1937 and was a participant at Whiteheads' famous Cambridge Sunday afternoon open houses, which ran until Whitehead's death in 1947. Aiken was a Harvard philosophy professor from 1946 through 1965 and along with W. V. Quine, his friend and colleague, and Mortin White had shepherded the transformation of the Harvard Philosophy Department with the addition of philosophers John Rawls, Hilary Putnam, and Robert Nozick, into a strong and significant presence of Analytic Philosophy in the United States. Housed in a custom half morocco clamshell box. Books signed by Alfred North Whitehead are scarce. One of the major philosophical texts of the 20th century, Process and Reality is based on Alfred North Whitehead's influential lectures that he delivered at the University of Edinburgh in the 1920s on process philosophy. Whitehead's master work in philosophy, Process and Reality propounds a system of speculative philosophy, known as process philosophy, in which the various elements of reality into a consistent relation to each other. It is also an exploration of some of the preeminent thinkers of the seventeenth and eighteenth centuries, such as Descartes, Newton, Locke, and Kant. (Inventory #: 34005)
$11500.00 add to cart or Buy Direct from
Raptis Rare Books
Share this item