The Posthumous Papers of the Pickwick Club. 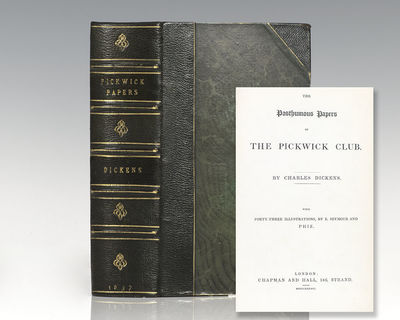 by Dickens, Charles
London: Chapman and Hall, 1837. First edition in book form of Dickens' first novel and one of his greatest works. Octavo, bound in three quarters morocco over marbled boards with gilt titles and tooling to the spine in six compartments within raised gilt bands, marbled endpapers, with the first state Veller title page, with 43 engraved plates by Seymour and Browne and five Buss plates which Dickens requested to be removed in subsequent printings. In very good condition. Few first novels have created as much popular excitement as The Pickwick Papers – a comic masterpiece that catapulted its twenty-four-year-old author to immediate fame. Readers were captivated by the adventures of the poet Snodgrass, the lover Tupman, the sportsman Winkle and, above all, by that quintessentially English Quixote, Mr Pickwick, and his cockney Sancho Panza, Sam Weller. From the hallowed turf of Dingley Dell Cricket Club to the unholy fracas of the Eatanswill election, via the Fleet debtors prison, characters and incidents sprang to life from Dickenss pen, to form an enduringly popular work of ebullient humour and literary invention. (Inventory #: 99840)
$3,500.00 add to cart or Buy Direct from
Raptis Rare Books
Share this item