Reconstruction After the Civil War. 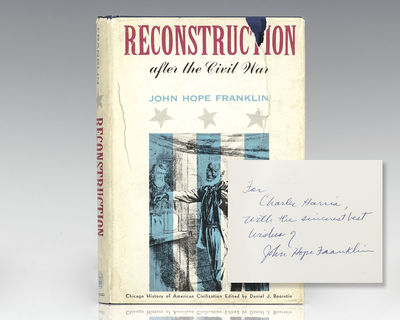 by Franklin, John Hope
Chicago: The University of Chicago Press, 1961. First edition of the historian's study of the Reconstruction era. Octavo, original cloth. Association copy, inscribed by the author on the front free endpaper, "For Charlie Harris, with the sincerest best wishes of John Hope Franklin." The recipient, Charles F. Harris, was a pioneering African American publishing executive who began his publishing career at Doubleday & Company in 1956 where he launched the Zenith Book Series which produced volumes on African American history for elementary and high school students. In addition to editing works by John Hope Franklin, Robert Weaver, Rayford Logan, and Jim Brown, Harris founded Amistad Press Inc. in 1986 which published critical studies of the works of Langston Hughes, Zora Neale Hurston, Richard Wright, Gloria Naylor, Alice Walker and Toni Morrison. Near fine in a very good dust jacket with a chip to the front panel. In this lucid study of the American Reconstrution era, noted historian John Hope Franklin points out many fallacies that still impede the solution of problems left by the Civil War. (Inventory #: 90369)
$975.00 add to cart or Buy Direct from
Raptis Rare Books
Share this item