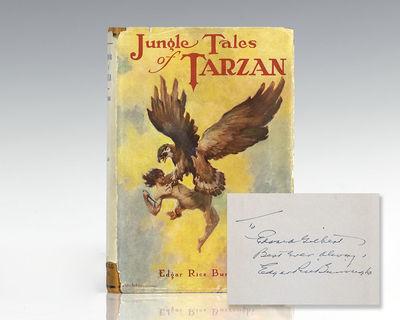 by Burroughs, Edgar Rice
Chicago: A. C. McClurg & Co, 1919. First edition of the sixth book in Burroughs' epic Tarzan series. Octavo, original orange cloth. Presentation copy, inscribed by the author on the front free endpaper, "To Edward Gilbert Best Wishes Always, Edgar Rice Burroughs. The recipient, Edward Gilbert was the brother of Burroughs' second wife and silent film actress Florence Gilbert. Near fine in the rare original dust jacket which is in very good condition with some chipping and loss to the crown and foot of the spine. Rare and desirable signed by Burroughs. The noble savage Tarzan first appeared in Burroughs' 1912 story Tarzan of the Apes, published in the pulp magazine The All-Story and in book form two years later. An archetypal feral child raised in the African jungle by Mangani great apes, Tarzan spawned innumerable works in literature and film, including 25 sequels and the popular Tarzan movie franchise which lasted from the 1930s to the 1960s. The sixth novel in the series, Jungle Tales of Tarzan is a collection of twelve loosely connected short stories of Tarzan's late teenage years, including Tarzan's First Love, A Jungle Joke, and Tarzan Rescues the Moon. (Inventory #: 96781)
$3800.00 add to cart or Buy Direct from
Raptis Rare Books
Share this item