Tarzan and the Jewels of Opar. 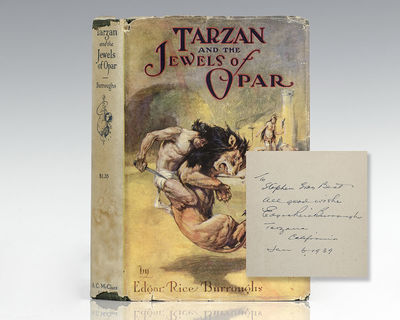 by Burroughs, Edgar Rice
Chicago: A. C. McClurg & Co, 1918. First edition, first printing of the fifth book in Burroughs' epic Tarzan series with with "Published, April, 1918" and W. F. Hall on the copyright page. Octavo, original green cloth with gilt titles to the spine and front panel. Presentation copy, inscribed by the author on the front free endpaper, "To Stephen Gray Best All good wishes, Edgar Rice Burroughs Tarzana California June 6 1939." In 1919, Burroughs purchased a large ranch north of Los Angeles, California, which he named "Tarzana". The citizens of the community that sprang up around the ranch voted to adopt that name when their community, Tarzana, California, was formed in 1927. Near fine in the rare original dust jacket which is in very good condition. This particular title is scarcely seen signed (Heins, T61; Zeuschner, 598). The noble savage Tarzan first appeared in Burroughs' 1912 story Tarzan of the Apes, published in the pulp magazine The All-Story and in book form two years later. An archetypal feral child raised in the African jungle by Mangani great apes, Tarzan spawned innumerable works in literature and film, including 25 sequels and the popular Tarzan movie franchise which lasted from the 1930s to the 1960s. The fifth novel in the series, Tarzan and the Jewels of Opar follows Tarzan in his return to Opar, the source of the gold where a lost colony of fabled Atlantis is located, and his daring escape from the clutches of the high priestess of Opar, La. (Inventory #: 96782)
$4,000.00 add to cart or Buy Direct from
Raptis Rare Books
Share this item