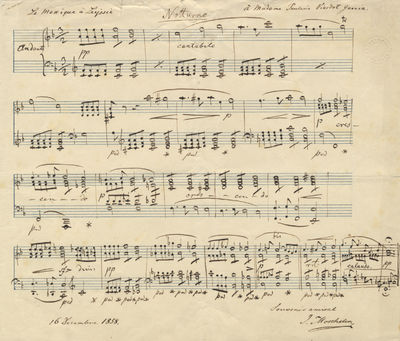 Endpapers watermarked with a fleur-de-lis and "Michele Dupino Marmorato." With priced catalog, "Opere Teatrali Intere," to upper wrapper listing works by Bellini, Donizetti, Rossini, Verdi, et al. composed through 1853 and with list of pieces with individual prices and plate numbers to title.

Some pieces have dual plate numbers and pagination on some pages that shared plates with abbreviated forms: "A si tremendo annunzio" (PN 3067 3200), "Eterno Iddio!" (PN 3069 3110), and "Da quel di che l'innocente" (PN 3070 3111). While the individual plate numbers suggest a date circa 1836 (Antolini, 175), the title page lists Girard's address on Largo S Ferdinando, their location from 1846. Furthermore, the wrappers on this issue are issued under Stabilimento Musicale Partenopeo, the name of publisher Girard beginning in 1853.

Belisario was composed to a libretto by Salvadore Cammarano after Luigi Marchionni's adaptation of Eduard von Schenk's Belisarius (1820). It premiered at the Teatro La Fenice in Venice on February 4, 1836 and was dedicated to his friend Giovanni Agostino Perotti (1769/70-1855), composer and maestro di cappella at San Marco.

"Well and widely received during its first decade, Belisario was however overtaken by the vogue for Lucia di Lammermoor, which immediately precedes it in the Donizetti canon. That rarity, an opera without a romantic love interest, Belisario had problems sustaining its popularity because the prima donna's role is unsympathetic dramatically, in spite of her brilliant arias in the first and last acts. The plot is, in sum, an uneasy mixture of classical and Romantic elements; but considering the eloquence of the music it drew from Donizetti it is fair to say that Belisario does not deserve the neglect into which it has largely fallen." William Ashbrook in Grove Music Online.

Ricci was an important figure in the transmission of 19th century traditions passed on to him by noted baritone Antonio Cotogni (1831-1918), whom he accompanied from the age of 12. He was active as a vocal coach at the Accademia Nazionale di Santa Cecilia, where he taught (amongst many others) Sesto Bruscantini, Anna Moffo, Rosalind Elias, Ezio Flagello, Peter Lindroos, and Martti Wallén. (Inventory #: 31235)
$303.00 add to cart or Buy Direct from
J. & J. Lubrano Music Antiquarians
Share this item