Walking on Thin Ice; In Pursuit of the North Pole [from the Steve Fossett collection] 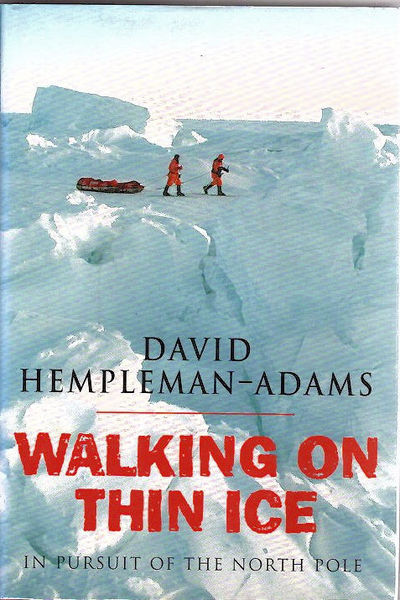 by Hempleman-Adams, David with Robert Uhlig
London: Orion Books, 1998. First Edition. Fine/Fine. Inscribed by the Author, [9.5x6.5in]; x, [2], 271 pp., 16 plates of 58 color images, 3 maps, appendices and index; Red cloth covers with silver lettering on spine. light blue end papers, all edges trimmed; Pictorial color dust jacket with red and black lettering on front and spine, image of men pulling sledge on broken ice field; Negligible shelf wear to book or dust jacket, inscribed to supporter by author on title page, book plate of Steve Fossett on front end paper. David Hempleman-Adams (1956-) a British industrialist and adventurer. He has successfully achieved the "Grand Slam" of traveling to the north and south magnetic poles, scaling the highest mountains on the seven continents, walking solo and unsupported to the South Pole and achieved the North Pole. This book is about the third try, in 1998, on the 600 mile trek man-hauling a sledge across the Arctic sea ice to the North Pole and back. This is a significant achievement capping a 15 year odyssey across the globe. Steve Fossett (1944-2007) was a successful commodities trader and an adventurer that set world records in balloons, sailboats, gliders and unique powered aircraft. His 2,000 + book collection included significant and authoritative accounts of aeronautics, polar, Asia, Australasia, circumnavigation's, mountaineering and others. In 2007, Fossett disappeared on a solo flight in a light aircraft over the eastern Sierra Mountains along the California and Nevada border. The wreckage was found by hikers a year later along the rugged Mt. Ritter range in the Ansel Adams Wilderness in Madera County, about 10 miles east of Yosemite National Park. (Inventory #: 13648)
$50.00 add to cart Available from
David Spilman Fine Books
Share this item