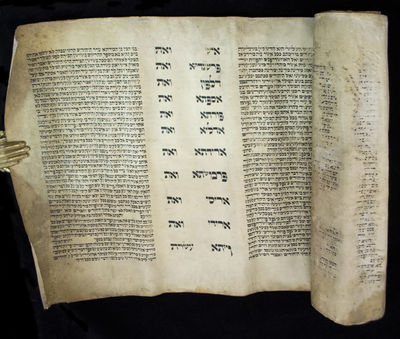 by HEBREW MANUSCRIPT
19th Century Esther Scroll Manuscript [HEBREW MANUSCRIPT]. [19th Century Esther Scroll Manuscript, or the Megillah. N.p. N.d. ca: 19th Century]. Manuscript scroll in Hebrew of the book of Esther on vellum. Two parts stapled together. (57 1/2 inches x 15 1/4 inches; 1445 x 385 mm). Hebrew manuscript text in black ink in ten columns. Second column from the right is larger text, bearing the names of the sons of Hamon. With some dampstaining and toning to vellum. The 5th and 6th columns from the right with some loss of text ink due to offsetting to verso of the scroll. This text while lighter, is still mostly legible. "A "Scroll of Esther" (megilat ester) is a manuscript copy of the biblical Book of Esther, which recounts the story of the salvation of the Jews in the Persian Empire, read in synagogues on the Evening and Morning Services of the holiday of Purim." (The Magnes Collection of Jewish Art and Life. UC, Berkeley). Esther scrolls, also known by the Hebrew term Megillot (sing.: Megillah, ''scroll') are copies of the Biblical book of Esther, transcribed on parchment scrolls to be read publicly on the feast of Purim, the anniversary of the Jews' deliverance from the threat of annihilation by Haman. Thus they are at once Biblical and liturgical texts. (The Perfect Scribe And An Early Engraved Esther Scroll, Eva Frojmovic). HBS 68203. $1,000 (Inventory #: 68203)
$1,000.00 add to cart Available from
Heritage Book Shop
Share this item