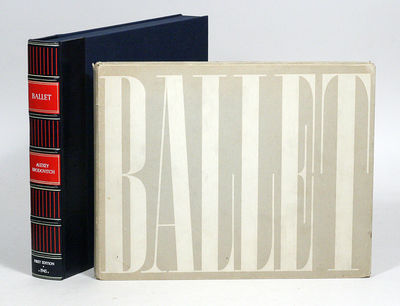 by BRODOVITCH, ALEXEY
New York: J.J. Augustin, 1945. First edition. Hardcover, dust jacket. Very Good. FIRST EDITION of Brodovitch's masterpiece; of profound influence in the history of photography and photobooks. "Although known primarily as a mentor and patron of photographers, due in large part to his position as art director and graphic designer at Harper's Bazaar, Alexey Brodovitch also made a legendary photobook of his own. Ballet, published in 1945 by J J Augustin in New York, has become a photobook legend for two reasons. Firstly, only a few hundred copies were printed, so the book is more talked about than actually seen. Secondly, the volume was extremely radical, both in terms of the images themselves and their incorporation into the design and layout... "The 104 pictures in Ballet had been taken by Brodovitch between 1935 and 1937. He photographed ballet companies visiting New York, including the Ballets Russes de Monte Carlo, with whom he worked in Paris in the 1920s. Brodovitch shot the photographs with a 35 mm Contax camera, during both rehearsals and performances, by available light, hand-held, and using shutter speeds as slow as a fifth of a second or more. This resulted in blurred images of the moving dancers and in high-contrast, grainy negatives exhibiting burnt-out areas of flare from the stage lighting. These pictures totally violated the accepted conventions of good photographic technique, which demanded a sharp rendition of the subject and a wide, smooth tonal scale. Far from trying to mitigate these shortcomings, Brodovitch deliberately exaggerated them. He printed on high-contrast paper, bleached areas with the chemical ferricyanide to create more contrast, and enlarged tiny portions of the negative to increase grain - familiar strategies in the 1950s and 60s, but not in the 1940s. "Brodovitch's layout was as radical as his pictures. He divided the book into eleven segments, each corresponding to a ballet. Every section was laid out in a continuous strip, each image bled across its own page, so that a double-page spread can often be read as a single panorama, and the whole section like a strip of movie film. This gives the book a vibrancy and a fluidity that perfectly captures the motion of the dance... Ballet is one of the most successful attempts at suggesting motion in photography, and certainly one of the most cinematic and dynamic photobooks ever published" (Parr/Badger, Vol 1; 240-1). Roth 101. Housed in a spectacular custom box by noted book artist Sjoerd Hofstra. New York: J J Augustin, 1945. Text by Edwin Denby. 104 black and white photographs. Oblong folio (8 3/4 x 11 x 1/4 in), original boards, original French fold dust jacket; custom half-leather box. Dust jacket with a few small spots of soiling and light wear to spine ends and corners; handsome small bookseller sticker ("Librairie Fischbacher") on rear flap. Interior fine. An outstanding copy of one of the most beautiful and important books in the history of photography. (Inventory #: 2261)
$6,000.00 add to cart or Buy Direct from
Manhattan Rare Book Company
Share this item