THE FEDERALIST, ON THE NEW CONSTITUTION. BY PUBLIUS. TO WHICH IS ADDED, PACIFICUS, ON THE PROCLAMATION OF NEUTRALITY. LIKEWISE, THE FEDERAL CONSTITUTION, WITH ALL THE AMENDMENTS. IN TWO VOLUMES. VOL. I. (ONE VOLUME ONLY) 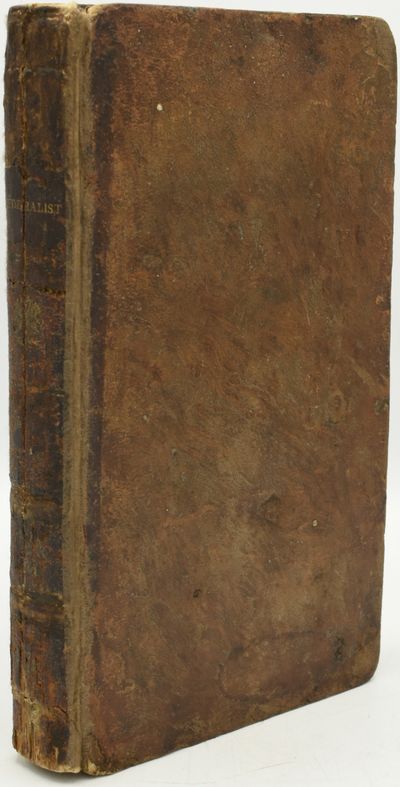 by [Alexander Hamilton]; [John Jay]; [James Madison]
New York, 1802. Full Leather. Good binding. Volume I only of the Third American Edition, revised and with additions, of the "most famous and influential American political work" (Howes H114). Usually called the "Second Edition," though it is in truth preceded by two prior printings (1788, 1799). The final edition to be issued during Hamilton's lifetime, Sabin notes that it was likely edited by William Coleman. This is also the first edition to explicitly name the authors, which are noted in Coleman's preface. Modern front endpaper, and lacking the rear endpaper. Else complete; [8], 318 pp. Previous owner's name excised from the title page, not affecting the text, with a paper patch applied to the verso by a professional conservator. Spine is fully cracked; boards are reattached using Japanese tissue. Early calf binding, with remnants of the leather label and gilt designs on the spine. (Howes H114. Sabin 23981). Good binding. (Inventory #: 288098)
$2,500.00 add to cart or Buy Direct from
Black Swan Books
Share this item

All sales are subject to availability. We make every effort to ship orders within two business days. Virginia residents please add 5.3% sales tax. Library and institutional billing requirements are accommodated. Returns: We accept returns for any reason within seven days of receipt provided we are notified in advance and the book is returned in the condition it was sold. If the book is not represented accurately we will cover return media rate shipping. Shipping costs are based on books weighing 2.2 lbs, or 1 kg. Multi-volume sets, heavy and over-sized books may require additional shipping, particularly if shipped internationally. In this event you will be contacted before the order is processed. The above noted exceptions may apply. We make every effort to respond promptly to inquiries (please note that we are not in the shop Monday and Tuesday so we will respond to any inquiries on Wednesday).
More from this seller

Boston : Roberts Brothers , 1889
(click for more details about RAMONA)
View all from this seller>