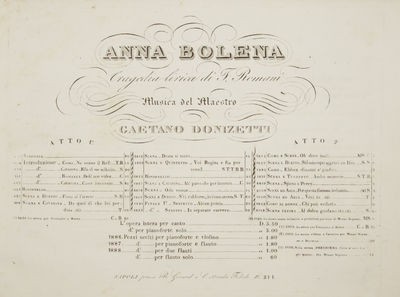 Title includes an index of pieces with individual plate numbers and prices, including alternate versions and chamber arrangments.

Binding moderately worn, rubbed, and bumped; scattered defects and stains; large gouge to lower. Title split at gutter; light scattered foxing; minor dampstaining to right margin of first few leaves and to lower margin throughout; page number "99" used twice. An early edition, later issue. Inzaghi IN. 35, pp. 150-2. Girard's first edition of Anna Bolena was issued circa 1831, shortly after its premiere and publication by Ricordi. This later edition contains a mix of old and new plates and was printed when Girard was located on Strada Toledo between 1837 and 1846.

Anna Bolena was composed to a libretto by Felice Romani after Ippolito Pindemonte's Enrico VIII, ossia Anna Bolena (1816) and Alessandro Pepoli's Anna Bolena (1788). The opera was first performed in Milan at the Teatro Carcano on December 26, 1830.

"This was Donizetti's first great international success, giving him his initial exposure to Paris and London audiences. Pasta (Anne) and Rubini (Percy) sang in the première. Immensely popular for almost half a century, it re-entered the modern repertory following a triumphant revival at La Scala with Callas in 1957. Since then the work has proved a favourite vehicle for such bel canto specialists as Sutherland, Sills and Caballé... [The] final 20 minutes of Anna Bolena reveals for the first time Donizetti's mature ability to flesh out an ariafinale so that it provides the substance of a gripping scene... Nothing Donizetti had done before approaches the scope and multiform intensity of this magnificent scene." William Ashbrook in Grove Music Online.

Ricci was an important figure in the transmission of 19th century traditions passed on to him by noted baritone Antonio Cotogni (1831-1918), whom he accompanied from the age of 12. He was active as a vocal coach at the Accademia Nazionale di Santa Cecilia, where he taught (amongst many others) Sesto Bruscantini, Anna Moffo, Rosalind Elias, Ezio Flagello, Peter Lindroos, and Martti Wallén. (Inventory #: 31251)
$495.00 add to cart or Buy Direct from
J. & J. Lubrano Music Antiquarians
Share this item