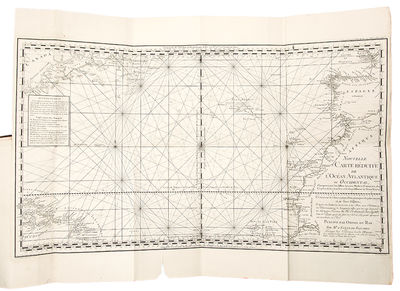 by FLEURIEU, Charles Pierre Claret de, Comte (1738-1810)
Paris: De L'Imprimerie Royale, 1773. 2 volumes, quarto. (10 x 8 inches). [4], lxix, [1], 803, [1]; [4], 622, xl pp. 5 engraved folding maps, one engraved plate, 5 folding tables. Contemporary mottled calf, spine with raised bands and six compartments, titled in second compartment, ruled in gilt, red edges, contemporary marbled endpapers. Provenance: Jose Jorge Ribeiro (bookplate) First edition charting a key moment in the longitude race when Fleurieu was, for the first time, able to test and calculate accurate locations using Berthoud's marine chronometer. Fleurieu, Lieutenant of the Royal Ships, sailed with Ferdinand Berthoud's marine clocks Nos. 6 and 8. Berthoud and Pierre Le Roy were battling to perfect the marine chronometer, at the same time John Harrison was developing his own instruments in England. Berthoud eventually won the lion's share of the rewards in France, having been judged to have the better design. No. 6 was one of the first timekeepers to be housed in the type of box that became the standard for all marine chronometers. (See Catherine Cardinal, "Ferdinand Berthoud and Pierre Le Roy: Judgement in the Twentieth Century of a Quarrel Dating from the Eighteenth Century in: The Quest for Longitude, ed. William J.H. Andrews, Cambridge, Mass., 1996, pp.282-292.) In 1768 Fleurieu was appointed to the command of the frigate Isis on an expedition to experiment with the new instrument, sailing from Aix in November of that year. He took observations at Martinique, Santo Domingo, Porto Rico, Havana, Jamaica, Colon, and New Orleans, and after touching at New York, Boston, and Newfoundland, returned to Aix on 11 October 1769. The results of this expedition were important to geography, as Fleurieu was able to provide accurate positions of the places visited, published in this and later works. Sabin 24750. (Inventory #: 36645)
$8,500.00 add to cart or Buy Direct from
Donald A. Heald Rare Books
Share this item
Donald A. Heald Rare Books
Offered by