A Voyage to the South Sea, undertaken by command of His Majesty, for the purpose of conveying the bread-fruit tree to the West Indies, in His Majesty's Ship the Bounty, commanded by Lieutenant William Bligh. Including an account of the mutiny on board the said ship, and the subsequent voyage of part of the crew, the ship's boat, from Tofoa, one of the Friendly Islands, to Timor, a Dutch settlement in the East Indies 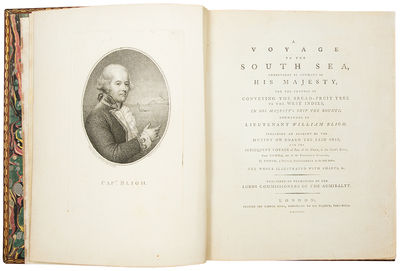 by BLIGH, William (1754-1817)
London: printed for George Nicol, 1792. Quarto. (11 5/8 x 9 1/4 inches). [10] 264pp. Stipple-engraved portrait frontispiece of Bligh by J. Condé after J. Russell, 7 engraved plates, charts and plans (comprising: 1 plate of a breadfruit, 2 folding plans, 4 charts [3 folding]). Contemporary calf, flat spine in seven compartments, titled in second compartment, ruled in gilt, contemporary marbled endpapers. First edition of the full official account of the Bounty expedition, the famous mutiny and Bligh's miraculous navigation to safety. This work "includes a revised version of the text of Bligh's narrative of the mutiny, previously published in London in 1790 ... This account was based upon Bligh's journal but was written, edited and seen through the press by James Burney, under the supervision of Sir Joseph Banks, during Bligh's absence from London while on his second breadfruit voyage on the Providence" (Hill [2004] p.48). The most remarkable part of the narrative is undoubtedly Bligh's account of the voyage in the Bounty's 23-foot launch. His achievement of safely navigating a distance of 4,000 miles in an open vessel packed with 19 men without serious mishap is almost without parallel in the history of ocean travel. This copy is a lovely, wide-margined example. Cox, II p 305; Du Rietz 93; Ferguson 125; Hill (2004) 135; Mendelssohn II, 1117; Sabin 5910; Wantrup 62a. (Inventory #: 36644)
$12,500.00 add to cart or Buy Direct from
Donald A. Heald Rare Books
Share this item
Donald A. Heald Rare Books
Offered by