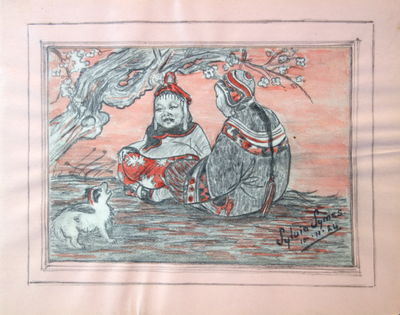 Town Hall Anerley, S. E. London , 1918. few pages appear lacking. . An autograph album with sentiments and sketches created by various employees of of the Ministry of Munitions, Drawing Office. Predominantly populated by women, as it was the type of work women did in wartime. Includes sentiments such as "Nature, impartial in her ends, When she made Man the strongest; In justice too to make amends, Made Woman's tongue the longest". Also another titled "Woman" discussing woman's skills, etc. It also includes a hand penned "Each in His Own Tongue" originally by William Hubert Carmuth. A French and English translation on Friendship. Also comments about working in the Drawing Office. Also includes fine watercolors and pencil drawings. (Inventory #: 01240114)
$550.00 add to cart or Buy Direct from Eclectibles
Share this item