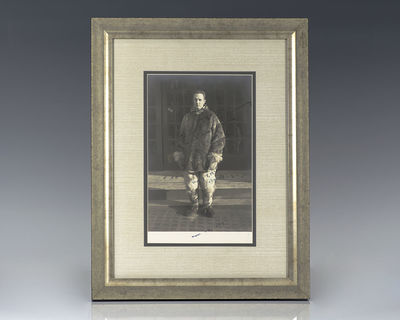 signed first edition
by Byrd, Richard E
Original black and white photograph of polar aviator Richard E. Byrd. Inscribed by Byrd, "May 9, 1926 To Cornelius C. Greenway with best wishes R.E. Byrd." Additionally signed by him, "May 9, 1926 R.E. Byrd" and dated a third time, "Nov. 28, 1929." The recipient, Cornelius C. Greenway, was a Dutch-American Universalist minister and eminent autograph collector. He served as the minister of the All Souls Church in Brooklyn, New York for almost 40 years and led the opposition against the unification of the Unitarian and Universalist denominations. In near fine condition. On May 9th, 1926 Admiral Richard E. Byrd, Jr. and Floyd Bennett attempted a flight over the North Pole in a Fokker F.VIIa/3m Tri-motor monoplane named Josephine Ford, after the daughter of Ford Motor Company president Edsel Ford, who helped finance the expedition. The flight went from Spitsbergen and back to its take-off airfield, lasting fifteen hours and fifty-seven minutes. The two men were soon awarded the U.S. Congressional Medal of Honor and Byrd decided to further pursue his interest in polar exploration, setting up a base camp on the Ross Ice Shelf in 1928. It was from there that Byrd and his companion became the first to fly over the South Pole. Inspired to further map the territory in 1934, Byrd set up camp alone 120 miles from the earlier camp where he lived alone for 5 months. That winter Byrd nearly perished "but was rescued by members of a meteorite observation team who set out when Byrd's messages became erratic and confused after five months in isolation... The ordeal had a lasting effect on Byrd. His book Alone is a record of his experience" (DAB). (Inventory #: 100106)
$1,200.00 add to cart or Buy Direct from
Raptis Rare Books
Share this item