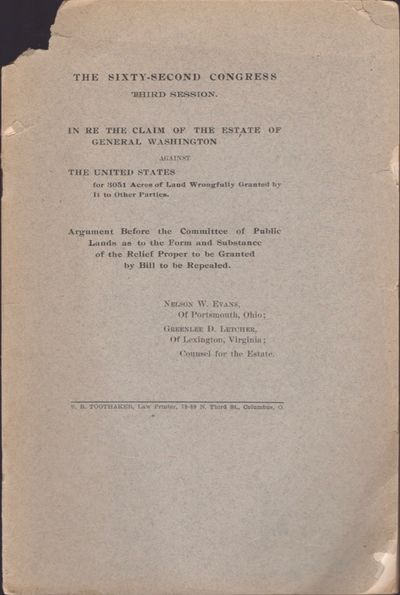 by Evans, Nelson W. (of Portsmouth, Ohio); Letcher, Greenlee D. (of Lexington, Virginia) [Counsel of the Estate]
Columbus, Ohio: F. B. Toothaker, Law Printer, 1913. Wraps. Fair. Stapled wraps (approx. 10" x 7"). 24 pages. Gray printed wraps with title on the front. Wraps are edge chipped with a large chip to the entire wraps in the upper left corner (no loss on any printed text). Paper is clean and in good condition. The Sixty-Second Congress was in session from March 4, 1911 to March 4, 1913. Contents concern lands in Virginia and Ohio from the Estate of George Washington. Scarce. 5 copies located in OCLC. An earlier related pamphlet, authored by Robert Edward Lee, regarding George Washington's Estate and involving the Sixtieth Congress was printed by Toothaker in 1908. The title is "In the matter of the bills to reimburse the estate of General George Washington for certain lands of his in Ohio lost by conflicting grants under the authority of the United States. Copies of the wills, statement of facts, and argument in favor of the estate before the committees. Senate bill 1238. House bill 5489." (From Hathi Trust Dot Org). (Inventory #: 17224)
$75.00 add to cart or Buy Direct from Americana Books
Share this item

The Escape of Daddy Rabbit

New York : D. O. Haynes & Company Publishers , 1914
(click for more details about The Era Poison and Liquor Register with Digest of State Poison Laws)
View all from this seller>