"A Kind of Magic" - Inscribed to Elizabeth Arden, with a Typed Note Signed 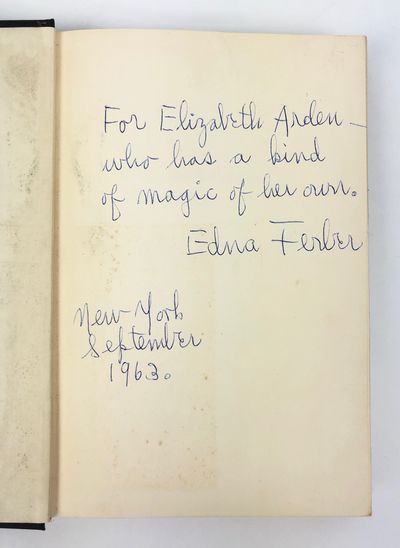 by Ferber, Edna. (1885â€“1965) [Arden, Elizabeth. (1878â€“1966)]
Garden City, New York: Doubleday & Company, Inc., 1963. Used; Like New/Used; Like New. Signed presentation copy of the American novelist, short story writer and playwright's memoir A Kind of Magic, inscribed to makeup mogul Elizabeth Arden and with an accompanying typed note signed wishing Arden a good recovery after an operation. 335 pp. Hardcover, black cloth boards, with dust jacket. Ferber has penned on the front free endpaper: "For Elizabeth ArdenĂ˘Â€Â”who has a kind of magic of her own. Edna Ferber. New York, September 1963." In the typed note (September 23, 1963; 2 pp. on blue-bordered letterhead) she writes: "Here am I, dear Elizabeth Arden, with some of that unwelcome commodityĂ˘Â€Â”unasked advice. In 1940 I had my gall-bladder out. It wasn't fun. But the later change in my general well-being was miraculous. It doubtless will be the same in your experience (though I always think of you as being equipped with more health and vitality than any other living human being.) In the coming year please don't forget that one mustn't be too smarty after a major goings-on such as this certainly is. Please don't move pianos or even continents. It doesn't pay off, that post-operational year. Take itĂ˘Â€Â”as our American saying goesĂ˘Â€Â”easy. In eight months of a year you'll be better than new. Well, I said it was unasked advice, didn't I! Edna Ferber." Paperclip mark to the note and to the first few pages; some edge losses to the dustjacket, in mylar; toning; overall fine in very good dust jacket. 6.25 x 9.5 inches (16 x 24.5 cm).Although not particularly known for an interest in beauty, Edna Ferber was a notable guest at Elizabeth Arden's first spa in the 1930's. (Inventory #: 17427)
$350.00 add to cart Available from
Schubertiade Music & Arts LLC
Share this item
Schubertiade Music & Arts LLC
Offered by