[AUTOGRAPH LETTER, SIGNED, FROM THOMAS JEFFERSON AS SECRETARY OF STATE, TO MARYLAND GOVERNOR THOMAS SIM LEE, REGARDING WASHINGTON'S NEUTRALITY PROCLAMATION, THE SEIZURE OF A BRITISH SHIP IN THE WATERS OFF MARYLAND, AND THE POWERS AND RESPONSIBILITIES OF STATES VERSUS THOSE OF THE FEDERAL GOVERNMENT] 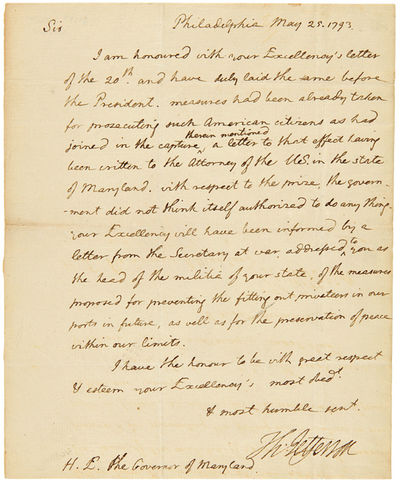 by Jefferson, Thomas
Philadelphia, 1793. [1]p. manuscript letter on a quarto sheet, 9 1/4 x 7 1/2 inches. Old folds. Small tape repair on verso. Near fine. A relatively brief but significant letter from Thomas Jefferson that relates to a number of important foreign and domestic political issues that bedeviled George Washington's administration in the early 1790s. The issues addressed by Jefferson, directly and indirectly, include the war between France and Great Britain, Washington's Neutrality Proclamation with regard to that conflict, the efforts of Edmond Genet to enlist private American aid in commandeering British shipping, and the duties, powers, and responsibilities of the individual states as opposed to the federal government. The task of enforcing American neutrality fell largely to Jefferson as Secretary of State, and it was a major instance of his reasoned notion that America must remain neutral coming into conflict with his emotional attachment to France. Edmond Genet, the first minister of the French Republic to the United States, arrived in Charleston, South Carolina on April 8, 1793, and immediately undertook a course of actions that strained French-American relations. France had declared war on Great Britain the previous February, and Genet sought to enlist American assistance in seizing British ships, and in attacking British holdings in North America. He commissioned American ships as privateers against British ships, and established French prize courts to divide the spoils. Just two weeks after Genet's arrival, Washington pronounced that the official policy of the United States toward France and Great Britain would be strict neutrality, and he instructed American citizens to refrain from any belligerent activities. This neutrality proclamation did nothing to dissuade Genet, however, and on April 29 a British-owned schooner, Eunice, was captured off the coast of Virginia by an American-built and armed schooner that sailed under French colors, but which was manned largely by Americans. The Eunice was sent to Baltimore, where it was to be tried in a (Genet-organized) prize court. In the wake of this and other events, the Washington administration issued several important directives in May 1793, including an order for prosecuting American citizens bearing arms with European belligerents, and circular letters to the state governors regarding the preservation of peace and against the outfitting of privateering vessels. The present letter from Jefferson to Maryland governor Thomas Sim Lee is a response to a letter from Lee dated May 20th. In that letter Lee updated Jefferson on the status of the Eunice, and deferred to the federal government on how to proceed with that issue and in similar cases. In the present letter of May 25th, Jefferson responds to Lee in a direct and forthright manner, informing him that he has shown Lee's letter of the 20th to President Washington. Jefferson addresses the issue of how to deal with Americans aiding the belligerents, referring to Attorney General Edmund Randolph's recently issued order: "Measures had been already taken for prosecuting such American citizens as had joined in the capture therein mentioned, a letter to that effect having been written to the Attorney of the U.S. in the state of Maryland." With regard to how the states should respond to instances of captured ships being brought into their ports, Jefferson informs Lee that the federal government expects the states to use their own resources: "With respect to the prize, the government did not think itself authorised to do any thing. Your Excellency will have been informed by a letter from the Secretary at war, addressed to you as the head of the militia of your state, of the measures proposed for preventing the fitting out privateers in our ports in future, as well as for the preservation of peace within our limits." This refers to the two orders issued by Secretary of War Henry Knox on May 23 and May 24, just a few days before Jefferson wrote this letter. Throughout 1793, Secretary of State Jefferson wrestled with the issues raised by the war between Great Britain and France: America's neutrality, his personal pro-French sentiments, the deleterious effects of Genet's activities, and the role that the states and the federal government should play in preserving peace. This letter encompasses all those issues. PAPERS OF THOMAS JEFFERSON 26, pp.67-68, 117-18. Malone, JEFFERSON AND THE ORDEAL OF LIBERTY, pp.79-89, 102-3. Harry Ammon, THE GENET MISSION (New York, 1973), pp.32-79. Lawrence S. Kaplan, JEFFERSON AND FRANCE (New Haven, 1967), pp.51-59. (Inventory #: WRCAM54931)
$47500.00 add to cart or Buy Direct from
William Reese Co. - Americana
Share this item

THE SOUTH: HER PERIL, AND HER DUTY. A DISCOURSE, DELIVERED IN THE FIRST PRESBYTERIAN CHURCH, NEW ORLEANS, ON THURSDAY, NOVEMBER 29, 1860...[wrapper title]

New Orleans : Printed at the Office of the True Witness and Sentinel , 1860
(click for more details about THE SOUTH: HER PERIL, AND HER DUTY. A DISCOURSE, DELIVERED IN THE FIRST PRESBYTERIAN CHURCH, NEW ORLEANS, ON THURSDAY, NOVEMBER 29, 1860...[wrapper title])