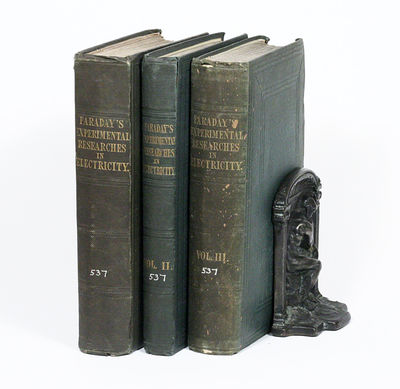 by FARADAY, MICHAEL
London: Richard and John Edward Taylor, 1839. First edition. Original cloth. Very Good. FIRST EDITIONS IN ORIGINAL CLOTH OF ALL THREE VOLUMES OF FARADAY'S MONUMENTAL EXPERIMENTAL RESEARCHES IN ELECTRICITY, THE MOST COMPREHENSIVE RECORD OF HIS ACHIEVEMENTS. PMM 308. "Faraday was both one of the greatest physicists of the nineteenth century and one of the finest experimenters of all time... He was the first to produce an electric current from a magnetic field, invented the first electric motor and dynamo, demonstrated the relation between electricity and chemical bonding, discovered the effect of magnetism on light, and discovered and named diamagnetism, the peculiar behaviour of certain substances in strong magnetic fields. He provided the experimental, and a good deal of the theoretical, foundation upon which James Clerk Maxwell erected classical electromagnetic field theory" (Printing and the Mind of Man 308; Britannica). Faraday published the results of his experiments and discoveries in journals and it was not until he collected them in these volumes that his work became more widely and permanently available. Since the volumes were issued separately over a period of sixteen years, it is very rare to find a set of the three first editions together. Experimental Researches in Electricity. Reprinted from the Philosophical Transactions. London: Richard and John Edward Taylor, 1839, 1844, 1855. Octavo, original green cloth. Three volumes. Ex-libris Bath Public Library with call numbers on spine, bookplate on front pastedowns, and occasional small embossed stamp to text and all plates. Ownership signature of Alfred Jones on each title. Text clean, some spotting to cloth and one repaired spine tear, on hinge split but holding. RARE. (Inventory #: 2266)
$7,800.00 add to cart or Buy Direct from
Manhattan Rare Book Company
Share this item