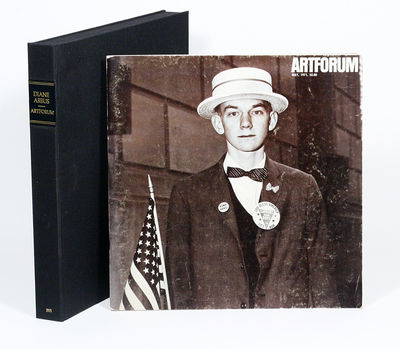 by ARBUS, DIANE
New York: Charles Cowles, 1971. First edition. Original wrappers, custom box. Very Good. THE GROUNDBREAKING APPEARANCE OF DIANE ARBUS'S PHOTOGRAPH'S IN ARTFORUM. By 1971, "an appreciation of [Arbus's] photography was building in the art world at large... The most gratifying acknowledgement of her as an artist came not from a museum but from a magazine. Through Henry Geldzahler, the contemporary-art curator at the Metropolitan Museum, Arbus arranged a meeting with Philip Leider. The founding editor of Artforum, an influential monthly art magazine that championed modernism, Leider regarded the sculptor and land artist Robert Smithson as the most significant artist of the day. He had never featured a photographer in his pages. He didn't believe photography mixed with painting and sculpture; he wasn't even convinced that it was an art form. But he agreed to meet Geldzahler in Arbus's apartment and look at the pictures in her portfolio. "Even though he was very aware of Arbus by reputation, he didn't know her work well. The box of ten photographs astounded him. He wanted to reproduce all of the pictures in his magazine. Arbus offered him stacks of other photographs, which he looked through as she chatted with Geldzahler. A central tenet of modernism, as formulated most forcefully by the critic Clement Greenberg, is that a painter or sculptor should respect and exploit the capacities and limitations of the form in which he works. Since a canvas is flat, for example, a painter mustn't resort to trickery that would suggest otherwise. He should emphasize the flatness. Studying Arbus's pictures, Leider concluded 'that Diane's work accomplished for photography what we demanded be accomplished, under the needs of Modernism, for all arts: it owed nothing to any other art. What it had to offer could only be provided by photography.' He committed himself to publishing her work. He ended up not being able to use all ten of the photographs, but he did take six, giving each a full page. Indeed, for one of them-the pro-war demonstrator in the straw boater-he went a step further. He placed it on the cover. To jump from never including a photographer to assigning one the most prominent place in the magazine was a huge leap. The showcase for Arbus in the May 1971 issue of Artforum marked a key moment in the recognition of photography as more than a handmaiden or stepsister of art. Fully fledged, photography had flown the nest. It was a grown-up art form, with Arbus clearly a leader" (Arthur Lubow, Diane Arbus: Portrait of a Photographer). With Arbus's "poetic and gnomic" text-five short standalone paragraphs-introducing her work (ibid.). Tragically, Arbus would commit suicide only two months later, in July 1971. "Five Photographs by Diane Arbus". IN: Artforum, May 1971, Volume IX, No. 9. Quarto (10.5x10.5 inches); custom cloth box. Light rubbing to wrapper covers; text fine. An outstanding copy of a critically important issue that has become difficult to find in collectible condition. (Inventory #: 2267)
$1,900.00 add to cart or Buy Direct from
Manhattan Rare Book Company
Share this item