The Philosophie, commonlie called, the Morals. Written by the learned Philosopher Plutarch of Chæronea. Translated out of Greeke into English, and conferred with the Latine translations and the French, by Philemon Holland of Conventrie, Doctor in Physicke. Whereunto are annexed the Summaries necessary to be read before every Treatise 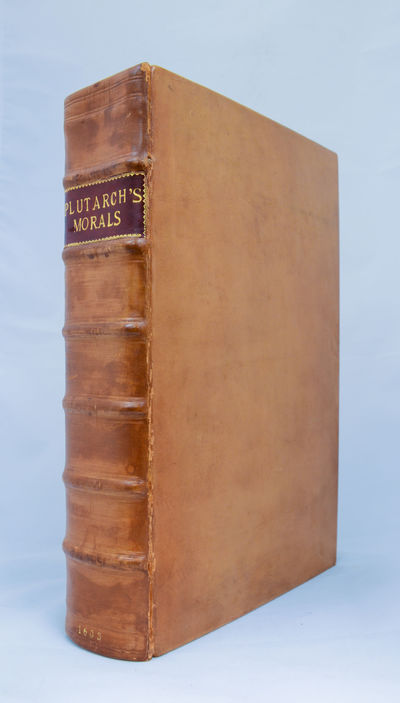 by Plutarch, trans. Philemon Holland
London: Arnold Hatfield, 1603. First English-language edition. Hardcover. Near fine. THE FIRST ENGLISH-LANGUAGE EDITION OF THE MORALS. Folio in 6s (12 3/4” x 8 1/4”, 321mm x 208mm)... Collated perfect with Huntington Library copy (62966)... Bound in full tan polished calf (early XXc, with 2 initial and final binder’s blanks), with blind-stamped inside dentelles. On the spine, six raised bands. Title gilt to red crushed morocco in the second panel. Top-edge stained black. Fore and lower edge speckled red. With ownership signatures of P. Feilde and of M. Barnham (“M: Barnham precij—18s”) to the recto and of Thomas Stanwick (“Thomas Stanwick M:D:”) to the verso of the title-page... Mild rubbing to fore-corners. Nick to lower edge of rear cover and to rear cover near fore-edge. Light superficial cracking to joints and along center of spine. Nick to spine in fourth panel. Professional repair to upper fore-corner of Mm5 (pp. 417/8). Closed tear to lower fore-corner of Y3, closed tear to lower fore-corner of Eeeee3, closed tear to lower fore-corner of Aaaaaa4, missing lower fore-corner of Cccccc2, chip from fore-edge of Ffffff3. ¶1-4 and Ffffff3-6 moderately toned at edges, with light diagonal creases. Foxing is scarce. The text-block is remarkably fresh and bright... The Moralia (_____), often rendered into English as Customs and Morals, is a compendium of treatises, some by Plutarch and others not (thought to be by a single author, conventionally called Pseudo-Plutarch), published around AD 100. Stephanus’ 1572 edition encompasses 78 treatises split into 14 books; this organization has been adopted by scholars since. According to the table of contents in the current item, there are only 72 treatises, and no division into books. In fact, there is a division of the work into two tomes, the second beginning with The Symposiacks, or table Questions (Holland’s treatise 44), and all 78 of the Stephanus treatises are in fact present... The order of the treatises, despite Holland’s doubtless familiarity with Stephanus’ edition, is his own, and often makes better sense. Holland, a medical doctor and schoolmaster, was one of the great Classicists of the late sixteenth century; the dedication to James I is a testament to his stature. Indeed, so prominent was this translation that it is widely considered a source for Shakespeare: “Shakespeare was likely indebted to this collection for much of the background in “Antony and Cleopatra,” and for miscellaneous classical lore in other plays.”... With woodcut initials and composite ornaments at the beginning of each treatise, it is a stately and elegant book. Holland’s Morals stands at the head of a great British tradition of English translations of Plutarch, and was executed in under three years; it is as remarkable as it is useful... The marks of ownership attest to the popularity of the treatise in the seventeenth and eighteenth centuries... The earliest is likely that of M. Barnham, who includes the price paid: a staggering 18 shillings (“precij——18s”). Based on the hand, Barnham likely bought this book within fifty years of publication. The next is that of P. Feilde, dated 1733. This is Paul Feilde, MP for Hertford in 1770 and 1776, colleague of Edmund Burke, memorialized for his “early and strenuous opposition to the American war” on his monument in Stanstead church. At some point shortly afterward, presumably, the book was owned by Thomas Swanwick, M.D. (1791-1859; M.D. Edinburgh 1829), a prolific collector of the late nineteenth century. He was a Justice of the Peace in Macclesfield (in the Peak District). WorldCat records a fairly extensive holding in classical texts: Theocritus, Livy, Statius, Martial and so forth. We know that he also owned books once in the collection of Dr. Johnson and Mrs. Piozzi... Lowndes IV.1891, ESTC S115981. Antiquarian (Inventory #: 300001)
$9500.00 add to cart Available from Pryor-Johnson
Share this item

Specializing in We are a generalist shop, with several concentrations of material. On the modern side, signed first editions, including poetry and Beat literature, art & photography, fine press and the book arts, and a few Children's books. On the antiquarian side, English literature, exploration and natural science, and English Gardening books before 1800 (with a good deal else besides).

We offer a 30 day return guarantee, with full refund including original shipping costs for up to 30 days after delivery if an item arrives misdescribed or damaged.
More from this seller

Hell’s Angels. The Strange and Terrible Saga of the Outlaw Motorcycle Gangs

New York : Boni and Liveright , 1922
(click for more details about The Waste Land)
View all from this seller>