Hartigan and Rivers With O’Hara. 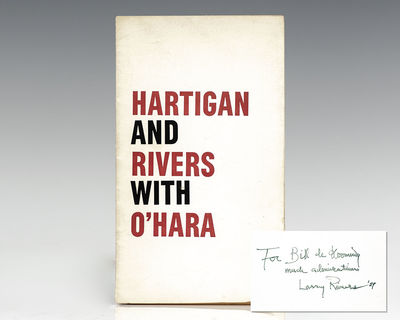 by O'Hara, Frank, Larry Rivers and Grace Hartigan [WIlliam de Kooning]
New York: Tibor de Nagy Gallery, 1959. First edition of this exhibition flyer for the 1959 Tibor de Nagy exhibition of works by Larry Rivers and Grace Hartigan inspired by O'Hara's poetry. Octavo, original wrappers as issued, illustrated with twelve black and white lithographs. Association copy, inscribed by Larry Rivers on the verso of the front cover to fellow member of the informal New York School of artists Willem de Kooning, "For Bill de Kooning much admiration Larry Rivers." Musician, artist and filmmaker Larry Rivers took up painting in 1945 and lived in the the Hotel Chelsea, notable for its artistic residents such as Bob Dylan, Janis Joplin, Leonard Cohen, Arthur C. Clarke, Dylan Thomas, Sid Vicious and multiple people associated with Andy Warhol's Factory. A part of the New York School of the 1950s (of which Frank O'Harra was the crux due to his position at the MOMA), Rivers' paintings drew inspiration from the contemporary avant-garde movement, in particular abstract expressionism. De Kooning too was a part of the New York School, his well-known The Woman Series notable for its powerful expression of the frustrations and desires of the post-World War II era. In near fine condition. An intimate association copy, linking these great artists of the 20th century. The New York School was an informal group of American artists, musicians and poets active in New York City throughout the 50s and 60s. At the heart of the group was poet Frank O'Harra, due to his post as a curator at the Museum of Modern Art where he created connections between poets and painters including Larry Rivers, John Ashberry, and Fairfield Porter. The group participated in many joint collaborations including several publications, exhibitions, and works of art. While the poets of the group often wrote in an immediate and spontaneous manner reminiscent of stream of consciousness writing, the painters represented the New York abstract expressionists. The Abstract Expressionism movement in American painting was the first specifically American movement to achieve international influence and put New York City at the center of the western art world, a role formerly filled by Paris. (Inventory #: 90478)
$2,000.00 add to cart or Buy Direct from
Raptis Rare Books
Share this item