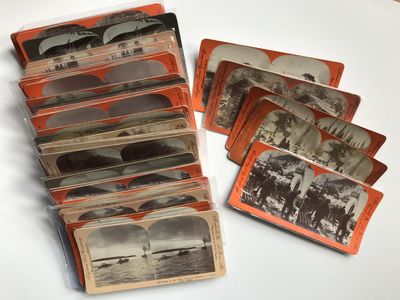 by [Alaska]. [Western Photographica]
Meadville, Pa: Keystone View Company, 1899. Very good.. Thirty-three stereoviews. Light scattered wear, but images generally clean and crisp. A collection of stereoviews showing scenes from the Alaska Gold Rush, including numerous photographs of Native Americans, miners, the diggings, and mining camps. The Keystone View Company was one of the most prolific and popular stereoview companies in America, becoming a leader in the field in the early years of the 20th century. The images here all depict the Klondike and the Alaskan Gold Rush, including scenes in Beaver City, Chilkoot Pass, the Alleukaket River, and others. A series of five stereocards all show scenes in Sheep Camp, including "9212 - Courtney's Store and Post Office," "9202 - Our Party en Route to the Klondike," "9198 - A Picturesque Street," "9210 - Main Street," and "9206 - Dr. J. Jones' Residence--Preparing Dinner." Four cards contain images of the native population, entitled "9358 - Natives of Alaska--Alaskan Indians," "11518 - Drying Fish on the Yukon River, Alaska," "11540 - Malamut Indians Moving Camp, Alaska," and "11558 - Stop for Lunch, Malamut Indians, Alaska," which shows a squaw breast feeding her baby. A nice collection of views of Alaska at this pivotal moment in its history. (Inventory #: 551)
$750.00 add to cart Available from
McBride Rare Books
Share this item

Chicago : South and West Land Company , 1906
(click for more details about The Famous Rhea Pasture Bovina, Texas Just Opened for Settlement. The Last of the Great Prairie Farming Lands)
View all from this seller>