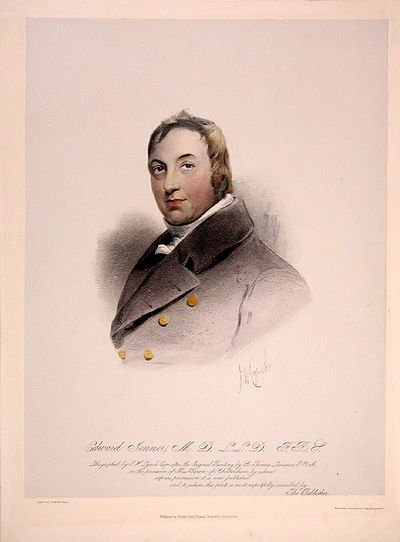 by LYNCH, J.H after Sir Thomas LAWRENCE
Gloucester: Published by Charles Heald Thomas, 1827. Hand-coloured lithograph. Fine india paper mounted on thick cream wove as issued. In excellent condition except for very faint sunning where a mat was in place. Image size: 18 5/8 x 14 1/16 inches. A distinguished portrait of the famous doctor, Edward Jenner, who discovered vaccination. Lynch's lithograph is a wonderful interpretation of Lawrence's famous portrait of Edward Jenner, the revolutionary doctor who discovered vaccination. Edward Jenner is remembered today as the pioneer of smallpox vaccination and father of immunology. After training in London Jenner spent his whole career as a country doctor in his native county of Gloucestershire. His research was based on careful case-studies and clinical observation more than a hundred years before scientists could explain the viruses themselves. So successful did his vaccination prove that by 1840 the British government had banned alternative preventive treatments against smallpox. "Vaccination," the word Jenner invented for his treatment (from the Latin vacca, a cow), was adopted by Pasteur for immunization against any disease. (University of South Carolina webpage) O'Donoghue, Catalogue of Engraved British Portraits... in the British Museum 2. (Inventory #: 4820)
$750.00 add to cart or Buy Direct from
Donald A. Heald Rare Books
Share this item
Donald A. Heald Rare Books
Offered by

[Portrait of James Abbott McNeill Whistler in front of the Thames]