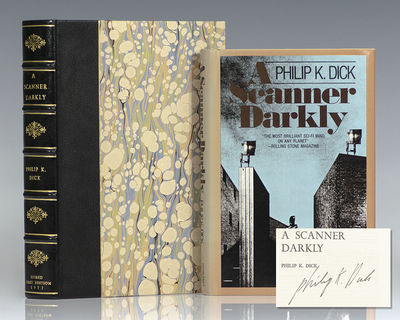 by Dick, Philip K
New York: Doubleday and Company, 1977. First edition of one of the author's best-known works. Octavo, original cloth. Signed by Philip K. Dick on the title page. Fine in a fine dust jacket. Jacket illustration by the Quays. Housed in a custom half morocco clamshell box. Rare and desirable signed. Upon its publication in 1977, A Scanner Darkly was hailed by ALA Booklist as "his best yet!" Brian Aldiss lauded it as "the best book of the year." "It is Dick's most politically astute novel" (Christopher Palmer, Science Fiction Studies 18:3). "An affecting, powerful novel" (Anatomy of Wonder II-333). It was made into the 2006 film directed by Richard Linklater and starring Keanu Reeves, Winona Ryder, and Robert Downey, Jr. (Inventory #: 101745)
$10,000.00 add to cart or Buy Direct from
Raptis Rare Books
Share this item