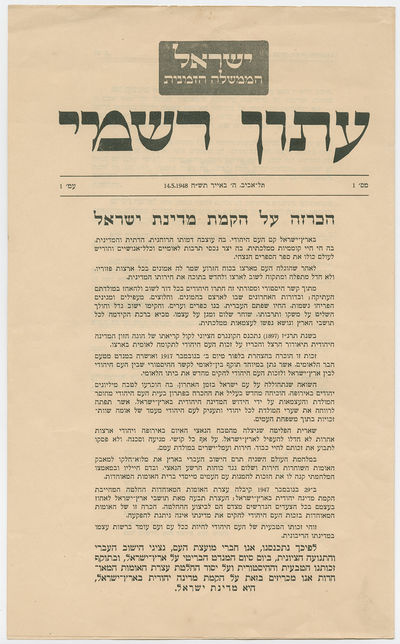 by [ISRAEL]
The first issue of the Official Gazette of the Israeli provisional government, contains the first printing of "The Declaration of the Establishment of the State of Israel," the new nation's Declaration of Independence. The names of the 37 members of the Provisional Government who signed the document, headed by David Ben-Gurion (1886-1973), are listed on the second page. [ISRAEL].
Newspaper. Iton Rishmi [Official Gazette], May 14, 1948. Bulletin. Tel Aviv, Israel: Provisional Government of Israel. In Hebrew. 3 pp., 8 x 13 in.

"WE EXTEND our hand to all neighbouring states and their peoples in an offer of peace and good neighbourliness, and appeal to them to establish bonds of cooperation and mutual help with the sovereign Jewish people settled in its own land. The State of Israel is prepared to do its share in a common effort for the advancement of the entire Middle East.

"WE APPEAL to the Jewish people throughout the Diaspora to rally round the Jews of Eretz-Israel in the tasks of immigration and upbuilding and to stand by them in the great struggle for the realization of the age-old dream - the redemption of Israel.

"PLACING OUR TRUST IN THE "ROCK OF ISRAEL," WE AFFIX OUR SIGNATURES TO THIS PROCLAMATION AT THIS SESSION OF THE PROVISIONAL COUNCIL OF STATE, ON THE SOIL OF THE HOMELAND, IN THE CITY OF TEL-AVIV, ON THIS SABBATH EVE, THE 5TH DAY OF IYAR, 5708 (14TH MAY, 1948)."

After World War I, Britain controlled Palestine by League of Nations mandate. By 1946, Britain was under pressure to withdraw from Palestine because of attacks by Arab militias and armed Zionist groups. A special United Nations committee recommended the immediate partitioning of Palestine into two states, one for Arabs and the other for Jews, with Jerusalem maintained by the U.N. as an international city. The General Assembly approved the proposal, and the British announced they would leave Palestine on May 15, 1948.

Members of the provisional government drafted the Declaration of the Establishment of the State of Israel, and the provisional government voted in favor of it on May 12. They settled on final wording and held a Declaration ceremony in the Tel Aviv Museum on May 14. Twenty-five members of the Provisional State Council signed it that day, and twelve more added their names later. One was out of the country, and the other eleven were trapped in besieged Jerusalem.

The two rabbis in the provisional government argued for a including the draft phrase "and placing our trust in the Almighty," but a member of the secularist Mapam party strongly opposed it. Rather than including a direct reference to God, the Declaration uses the phrase "Rock of Israel" in the final section, which could refer either to God or to the land of Israel.

At midnight on May 14/15, 1948 (6 p.m., May 14, in Washington), the British Mandate officially ended, and David Ben-Gurion declared the establishment of the State of Israel. Eleven minutes later, President Harry S. Truman recognized Israel on behalf of the United States. In the next few days, Iran, the Soviet Union, and several other nations recognized Israel. Over the next few days after the declaration, armies of Egypt, Trans-Jordan, Iraq, and Syria engaged Israeli troops, starting the 1948 Arab-Israeli War, which ended ten months later with a substantial increase in the area governed by Israel.