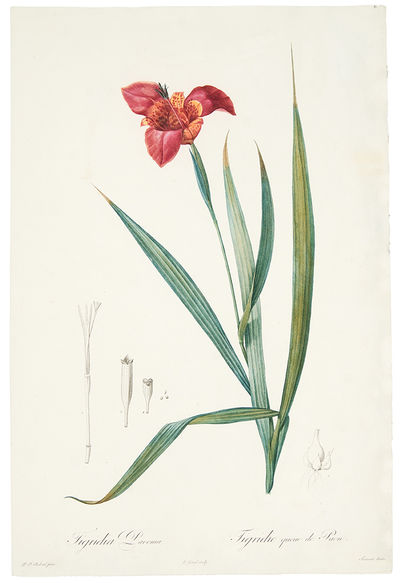 by REDOUTÉ, Pierre-Joseph (1759-1840)
Paris: Imprimerie de Didot jeune, 1802. Stipple engraving, printed in colour and finished by hand, engraved by de Gouy. Trimmed along platemark. Watermarked "A COURTALIN". Plate number partially trimmed. Expert restoration. Pierre-Joseph Redouté was one of the world's great flower painters. Born into a family that had been painters for at least two generations, Redouté went to Paris in 1782 with his brother where they worked as scene painters for the Théâtre italien. Redouté painted flowers in his spare time. The search for subjects led him to the Jardin du Roi and eventually Gerard van Spaendonck who made him an assistant. While at the Jardin du Roi, Redouté came to know Charles-Louis L'Heritier, an amateur botanist and writer of independent means. He gave Redouté a full time job as an illustrator, instructing him in plant anatomy. Redouté's understanding of plants contributed greatly to the clarity of his depictions. But it was Redouté's work in stipple engraving and colour printing that was to be of the greatest importance. Stippling and the application of two or three colour inks to one plate were engraving innovations that Redouté brought to French printmaking, and these were brought to perfection in Les Liliacées from which this work comes. Les Liliacées is one of two Redouté masterworks, the other being Les Roses. These works demonstrate the appropriateness of the accolade "Raphael of Flowers", for one is constantly impressed by the exquisite compositional sense and clarity of vision. More than with any other painter, one sees in Redouté's flowers living, breathing beings at their most beautiful moment. Cf. Nissen BBI 1597; cf.Great Flower Books (1990), p 128; cf. Dunthorne p 231; cf. Stafleu & Cowan TL2 8747; cf. MacPhaeil, Redouteana, 10. (Inventory #: 34185)
$2,450.00 add to cart or Buy Direct from
Donald A. Heald Rare Books
Share this item
Donald A. Heald Rare Books
Offered by

The British Miscellany: or Colored Figures of New, Rare, or Little Known Animal Subjects; many not before ascertained to be inhabitants of the British Isles

London : R. Taylor , 1806
(click for more details about The British Miscellany: or Colored Figures of New, Rare, or Little Known Animal Subjects; many not before ascertained to be inhabitants of the British Isles)