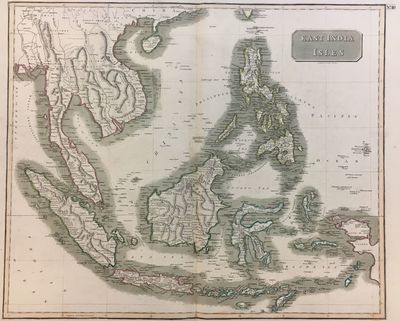 by THOMSON, John
Edinburgh: John Thomson, 1817. unbound. Map. Engraving with original hand coloring. Image measures 19.25" x 23.25". This spectacular map of the East Indian Islands covers from the Andaman Islands and Burma or Myanmar eastward to New Guinea and from southern China and Taiwan (Formosa) south to Timor. Centered on Borneo, it includes the Malay Peninsula, Sumatra, Java, Bali, Borneo, the Celebes, and the Philippines. Singapore Island (Sincapoor) is also labeled. The Island of Krakatoa, located in the Sunda Strait between Java and Sumatra is also identified. This volcanic island was destroyed in 1883, following the famous volcanic eruption. The explosion is apparently the loudest sound ever heard. Thomson also notes the "doubtful" St. John's Island just east to the Philippine island of Mindanao. This fictitious island first appeared on maps in the late 16th century and many mariners even claimed to have visited them, mistaking it for some other island in the region. The island continued to appear on maps until about 1850. Thomson's earlier editions of this map also label the island, but do not include the word 'doubtful', signifying that he was also quite convinced of their existence for a while. The map is in good condition with minor wear along the original centerfold and plate mark visible. Minor spotting at places. John Thomson (1777 - 1837) was a Scottish bookseller and publisher active in the early 19th century, who was one of the leaders in Europe who favored detailed and accurate mapping over the decorative and elaborate cartouches that appeared in earlier maps. His most important work was "Thomson's New General Atlas" and his "Atlas of Scotland". Although he went into bankruptcy twice during his career, his maps are today highly desirable for their scale and detail. This is beautiful example of his work. (Inventory #: 291643)
$500.00 add to cart or Buy Direct from
Argosy Book Store
Share this item