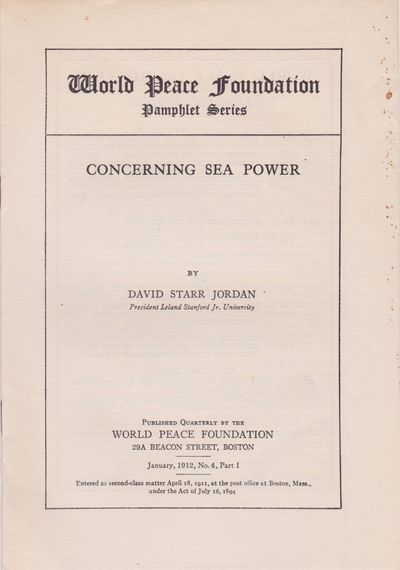 by Jordan, David Starr
Boston: World Peace Foundation, January 1912. No Edition Stated. Small 8vo (7 7/8 x 5 1/2 inches; 201 x 140 mm), 7, [1] pages, in stapled wrappers. Article decrying sea power. "Sea power is a device for doing injury at a distance," says the author, president of Stanford University. This article originally appeared in the New York Independent in July, 1911, and is republished here by the World Peace Foundation. Textbook publisher Edwin Ginn established the foundation in 1910. It still exists, now part of Tufts University's Fletcher School of International Law and Diplomacy. No other copies in commerce as of August 5, 2019. SCARCE.