THE PRESIDENT'S PROCLAMATION, RELATING TO THE SOUTH-CAROLINA ORDINANCE. [caption title] 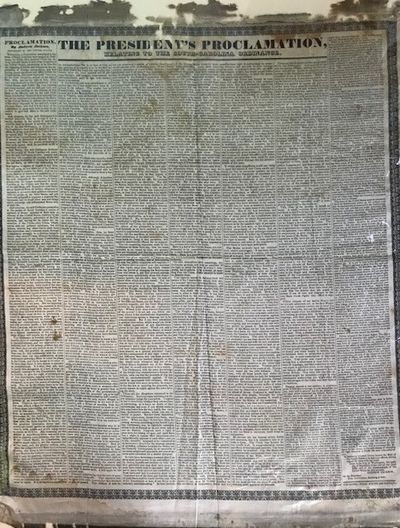 by Jackson, Andrew
Tuscaloosa [AL]: Wiley, McGuire and Henry, Prs, 1832. Broadside printed on silk, 60 x 49 cm, first line of title in bold capitals, the text enclosed within a wide ornamental border. Old staining to margins, partly into text, but all legible, damage and some loss to upper margin of broadside, extending at one point into the decorative margin and a few of the letters in the title word "President," fringe along lower edge darkened, fringe along upper edge perished. Corners of the broadside tipped onto a backing board. Jackson's famous proclamation of December 10, 1832, responding to an ordinance passed by the state of South Carolina exempting itself from acts passed by the United States Congress in 1828 and 1832 relating to "the imposing of duties and imposts on the importation of foreign commodities" and its threat to withdraw from the Union. Also known as the "Nullification Proclamation," Jackson denounced nullification as treason and insisted that the several states did not have a right to unilaterally reject, void, or prohibit the enforcement of an act of Congress, and appealed to "the understanding and patriotism of the people, warning them of the consequences that must inevitably result from an observance of the dictates of the [South Carolina] Convention." RARE, as are all 19th-century southern broadsides on silk. Wiley, McGuire & Henry were printers and publishers of the Alabama State Intelligencer newspaper in Tuscaloosa in the early 1830s. Not in American Imprints. Not Ellison Check List of Alabama Imprints, 1807-1870. Not in Threads of History or Hummel. Not recorded on OCLC. Cf. SABIN 35352 (no mention of place of publication, misdating proclamation): "A few copies were printed on satin, with ornamental border." Cf. Streeter sale III, 1738, for a variant with 8 columns, likely published in Washington, D.C.; broadside printings also appeared in Baltimore, New York, Boston, and Hartford. (Inventory #: 63943)
$7500.00 add to cart or Buy Direct from
Bartleby's Books
Share this item

THE KINGDOM OF THE PEARL

New York : Brentano's , 1925
(click for more details about THE KINGDOM OF THE PEARL)

EXPOSITION OF THE PRINCIPLES OF ABBOTT'S HYDRAULIC ENGINE, with tables and engravings, together with an illustration of the power of wheels, heretofore used

Boston, [MA] : S. Rowland Hart, Printer , 1835
(click for more details about EXPOSITION OF THE PRINCIPLES OF ABBOTT'S HYDRAULIC ENGINE, with tables and engravings, together with an illustration of the power of wheels, heretofore used)
View all from this seller>