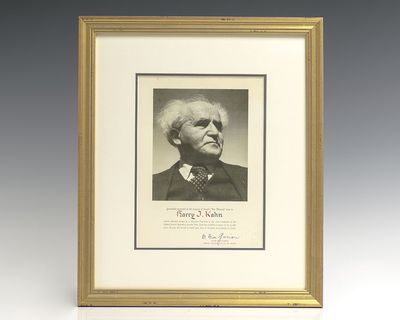 signed first edition
by Ben-Gurion, David
Photograph of David Ben-Gurion boldly signed by him, "Gratefully presented on the occasion of Israel's "Bar Mitzvah" year to Harry J. Kahn whose devoted service as a Division Chairman in the 1960 campaign of the United Jewish Appeal of Greater New York has enabled so many of our people from all over the world to build new lives in freedom and dignity in Israel." Double matted and framed. The entire piece measures 16.5 inches by 19.5 inches. David Ben-Gurion was the primary founder of the State of Israel and the first Prime Minister of Israel. Ben-Gurion's passion for Zionism, which began early in life, led him to become a major Zionist leader and Executive Head of the World Zionist Organization in 1946. As head of the Jewish Agency from 1935, and later president of the Jewish Agency Executive, he was the de facto leader of the Jewish community in Palestine, and largely led its struggle for an independent Jewish state in Mandatory Palestine. On 14 May 1948, he formally proclaimed the establishment of the State of Israel, and was the first to sign the Israeli Declaration of Independence, which he had helped to write. Ben-Gurion led Israel during the 1948 Arab-Israeli War, and united the various Jewish militias into the Israel Defense Forces. Subsequently, he became known as "Israel's founding father." (Inventory #: 79748)
$2,200.00 add to cart or Buy Direct from
Raptis Rare Books
Share this item

January 19, 1830
(click for more details about Andrew Jackson and Martin Van Buren Signed Document.)
View all from this seller>