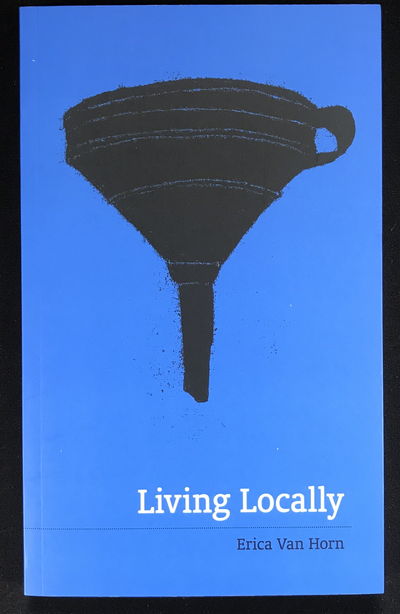 by [Coracle] Erica Van Horn.
Clonmel, Tipperary, Ireland:: Coracle Press,, 2014.. Unstated. 144 pages; 230 x 140mm. Offset in 2-colours. Sewn paperback with flaps. Coracle Press: "An edited selection from the on-line journal from 2007 to the present and an endorsement of the on-going series of the same title." "'Living Locally' selects entries from a daily journal written over five years about rural life in and around a farming valley in Tipperary, to the north of the Knockmealdown Mountains. With needle-sharp observation and in plain words, Van Horn makes remarkable what might otherwise have gone unrecorded: the familiarity of neighbours, of animals and of weather, the regularity of the patterns of transaction on roads and in nearby villages and towns, and, from an outsider's perspective, the unfamiliarity of speech and custom. What results is a human geography whose immediacy recalls earlier local and rural records and enquiries, such as the diary of Francis Kilvert in the Welsh Borders in the 1870s, or Cecil Torr's recollections from his Dartmoor village, 'Small Talk at Wreyland'. In common with these is a concern with both the colloquial and the vernacular, and the strangeness found in such a concentration of repetition and usage." Susan Howe: "Erica Van Horn has produced a meticulous field guide of what it means to be an American discovering the embedded, entangled mysteries of being Irish."  All such jewels should be this affordable. (Inventory #: 22974)
$20.00 add to cart Available from Vamp & Tramp
Share this item

Boone, North Carolina: : Clifton Meador, , 2020.
(click for more details about Achieropoeita and Concerning Archieropoieta / or Not Made by Hands.)